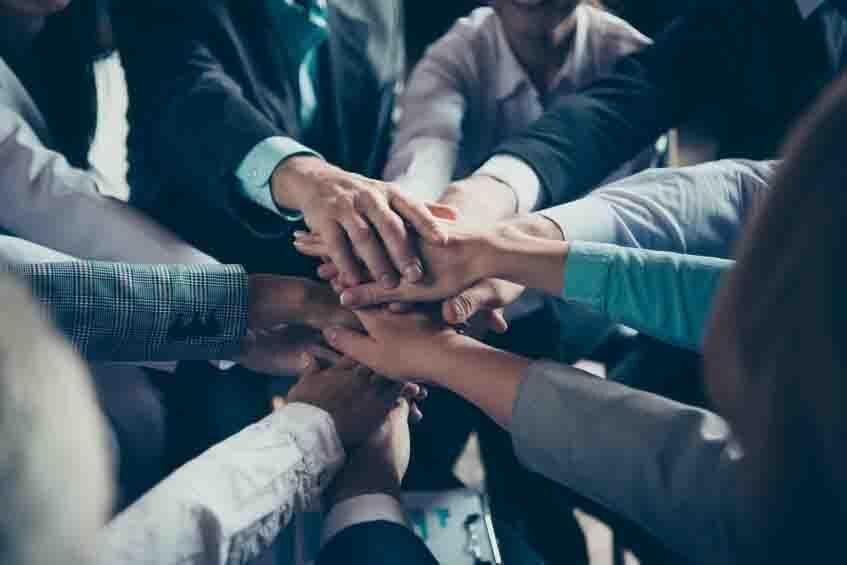 As COVID-19 vaccines continue to roll out and restrictions are lifted by Gov. Doug Ducey, CEOs are facing pressure to make decisions about when and how professionals will return to office work.

Reports say that by midsummer, a good portion of the working-age population should be vaccinated, which will play a significant role in how and when employees go back to work.

“Because of such hopeful signs, CEOs at companies that remained all-remote (during the pandemic) are starting to think seriously about how and how much to bring their employees back to the office, and how to best answer questions about policies and timelines their boards will soon ask,” said Dan Ciampa, a former CEO and adviser to boards and chief executives.

“They realize that, given all that has happened over the last year, more employees than ever before will work remotely, and for tasks that can be done more efficiently that way, investments in technology are necessary,” he said.

Roughly 20% of workers will remain remote employees, according to several studies.

However, if the past year has taught us anything, it is that nothing is as straightforward as it may appear, and returning to “normal” will be a long, arduous process.

In a Feb. 25 Harvard Business Review article, Ciampa said that with all of the uncertainty about what lies ahead, it is important to avoid steps that either will create unrealistic expectations or limit options.

They encourage business owners to seek reliable information and expertise from a variety of sources as they make challenging logistical decisions.

As workers prepare to return to the office, productivity, communication and collaboration are at the forefront of every manager’s mind.

But what can and should employees expect when they return?

Many have become accustomed to the rather short commute from the kitchen to their home office, and those reduced drive times have positively impacted work/life balance.

Across all industries, business leaders are using the lessons from this large-scale, work-from-home experiment to reimagine how work is done — and what role physical offices should play.

According to McKinsey research, 80% of people surveyed reported they enjoyed working from home, and 41% said they are more productive than they had been before; about 28% said they are as productive.

Many workers who were liberated from long commutes and business travel found more productive ways to spend that time, enjoyed greater flexibility in balancing their personal and professional lives, and decided that they prefer to work from home rather than the office.

“In addition to those features, employees are looking for practical answers for how they will safely navigate the workplace upon their return,” said Paul Komadina, Phoenix-based senior managing director at CBRE.

Komadina said regardless of how workspaces are being configured, offices are being prepared for near-term occupancy with COVID-19 safety protocols and considerations in mind.

According to the most recent data from CBRE, 93% of the firm’s clients are preparing for office re-entry with social distancing floor plans, 93% are also implementing an increased/modified cleaning schedule, and 74% have a phased re-entry plan. Additionally, CBRE property management professionals are reporting a shift in the most sought-after building amenities.

“Features such as enhanced indoor air quality, touchless technologies and outdoor amenities have increased in popularity because of COVID,” Komadina said.

So, will open floor plans and multiple common areas revert to cubicles and private offices?

“‘Open-plan’ as a design strategy has often been misunderstood (or poorly implemented) to mean a sea of cubicles without space for private conversations, focus work or solitude. There is no question that such imbalance in a workplace leads to dysfunction. However, the reaction cannot be to give everyone their own private office,” he said.

“Aside from being inefficient, this would also have a detrimental impact on office energy, collaboration and relationship building. Additionally, private offices are not a silver bullet against spreading germs and disease.

“Whether you work in an open workstation environment or from a private office, you are sharing elevators, bathrooms, conference rooms, coffee pots and the air you breathe with the rest of the workplace, so office health and well-being programs need to be holistic.”

Komadina said many of the frequently asked questions he fields center around elevator protocol, access to PPE, and conflict resolution for mask mandate rule breakers.

“Ultimately, though, factors outside of employer control, such as vaccination status, child care/elder care responsibilities and safety of public transportation, may have greater influence on employee willingness to return to the office,” he said.

“Throughout the pandemic, the West Valley has continued to attract new companies,” said Sintra Hoffman, president and CEO of WESTMARC, a public-private coalition of 15 West Valley communities.

“While many small businesses were impacted, larger companies in health care, manufacturing and logistics increased their investments to meet changing consumer behaviors,” she said.

With the announcement by Taiwan Semiconductor Manufacturing Co. Ltd that it is developing 1,128 acres located near the northwest corner of Loop 303 and the 43rd Avenue alignment, new life has been breathed into the region’s tech sector.

Taiwan Semiconductor makes silicon chips for Apple Inc. and several other major technology companies. In March, it was reported that the company’s planned West Phoenix manufacturing plant would likely be three times larger than originally announced.

The Southwest Valley region leads the Phoenix metro with 4.8 million square feet of positive net absorption during the first three quarters of 2020, including nearly 2 million square feet absorbed by multinational companies, according to data from Cushman & Wakefield.

In addition to residential, retail and manufacturing, medical office and specialty health care development has been scooping up real estate in the West Valley for growth and expansion. One of those projects is the Akos medical campus in the Avondale Health-Tech Corridor north of Interstate 10.

The new medical campus estimates between 500 to 600 net new high-wage jobs for physicians, nurses, technologists and support staff in Avondale and Surprise. That number is expected to grow as more businesses take space on the campus, Cozatt said.

Additionally, Banner Health recently added a $53 million Glendale health center — one of its largest — to its portfolio of growing properties throughout the Valley.

Banner also opened a $28 million rehabilitation hospital in Peoria, and it is spending $106 million on expanding its Banner Boswell Medical Center in Sun City. That project, which will include a new emergency department and new patient tower, is expected to be completed in Q2 of this year.

From commercial and residential real estate to health care and finance as well as manufacturing and logistics, the West Valley has exploded with opportunity.

In fact, more than 30% of the professional finance and insurance workers in Maricopa County live in the West Valley.

About 80,000 people moved to metro Phoenix between 2019-20. California alone lost 60,000 residents last year, most of whom moved to Arizona, according to census data. The state also is seeing more migration from New York, Texas and other large, more expensive states. Many of these newcomers have opted to live in the West Valley.

Many companies will be able to access new pools of talent with fewer location constraints, adopt innovative processes to boost productivity, create an even stronger culture and significantly reduce real-estate costs.

Opportunities in the West Valley for class A office space have been limited, but one of the newest projects to come online in Goodyear will include 100,000 square feet of class A speculative office space.

“People in the West Valley have been talking about class A spec office space, but we’re the only group building it,” said Mike Olsen, CFO of Globe Corp.

The city of Goodyear and Scottsdale-based Globe Corp. formed a public-private partnership to develop 47 acres owned by Globe near 150th Drive and McDowell Road. The projects will include a 120,000-square-foot building housing Goodyear City Hall and city departments, a civic park and the spec class A office space.

The suburban “office renaissance” has made the West Valley — Goodyear in particular — a popular place to build, Olsen said.

“The ability to attract large office users expands the daytime employee base in Goodyear, which increases the attractiveness for new restaurants, retail and entertainment,” Arendall said.

According to a study by CBRE, 95% of the workforce in Goodyear commutes to Downtown Phoenix. The oftentimes brutal Interstate 10 drive into work in one reason Olsen is optimistic about the Globe project.

“Having the city of Goodyear as partner made it easier to build the project on spec,” Olsen said. “While Goodyear is nationally recognized as a hotspot for industrial development, we felt like we could pull in a corporate tenant.”

While Olsen couldn’t disclose which companies CBRE was targeting for the new office space, he did say a small finance firm has already reached out to him.

Groundbreaking for the Globe project was April 23, and Olsen said it is expected to be completed in mid-2022. Globe is already beginning to work on branding and on the retail space that will be part of the overall project.

Olsen said his team is also talking with several Scottsdale and East Valley communities, such as Gilbert, about replicating some of their restaurant and retail options at GSQ-Goodyear, the new official name of the project.

The first phase includes the city hall and the class A office space, and it is expected to be finished in June, but Olsen said Globe is working to finish the civic park area by November to commemorate the city of Goodyear’s 75th anniversary with a celebration in the park.

As a result of the pandemic and more than a year of work-at-home scenarios, companies are rethinking space needs going forward. Corporate headquarters are giving way to satellite offices around the Valley now that the concept of remote work is a productive and, for some, a welcome reality.

There are a number of opportunities throughout the West Valley for shared, reimagined and reuse spaces, which is usually much less of an investment for companies, said Hoffman, adding that the West Valley has a strong and talented workforce with 32% of advance business workers residing in the region. This presents many options for satellite offices in existing, reuse or new spaces.

“The finished product incorporated high-profile features that rival new, build-to-suit medical office buildings, but our strategic adaptive reuse approach delivered a gorgeous facility on a construction schedule half that of a ground-up project,” Toothacre said.

Goodyear Mayor Georgia Lord said in a recent interview that the project is a good example of repurposing an empty building and turning it into vibrant office space.

“The newly revitalized structure enhances the area and brings new jobs and opportunity for growth to the Goodyear Medical Innovation Corridor,” Lord said.