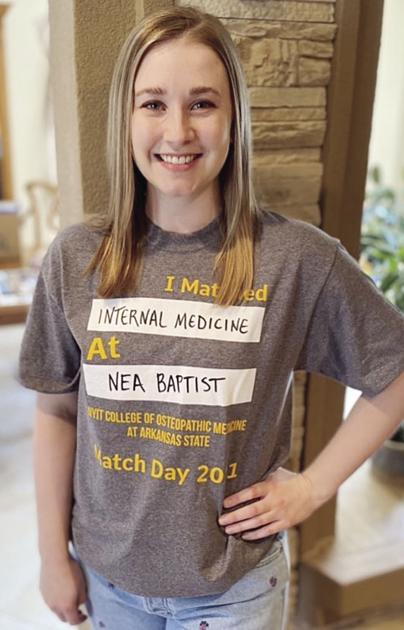 JONESBORO — Gabriella Gorton has always had a passion for science, and as a teenager her interests developed into a dream of becoming a physician after shadowing a local doctor.

Little did she know at the time that she’d have the opportunity to earn her medical education without ever leaving her hometown.

“It’s really amazing to see how my story has unfolded,” Gorton said. “I truly love Jonesboro. My family has a long history here and I’m so grateful for the education and support I’ve received in this community. I always knew I wanted to stay here. The growth of our city has brought some pretty incredible opportunities and I’ve been fortunate to benefit from them.”

On Thursday, Gorton will officially receive her doctoral hood from New York Institute of Technology College of Osteopathic Medicine at Arkansas State University, marking the next step in an education that has allowed her to take a path that was hardly fathomable just a few years ago.

Gorton was born in Jonesboro and attended Ridgefield Christian School for kindergarten through sixth grade before transferring to Valley View for junior high and high school. She earned a degree in biology/pre-professional studies from Arkansas State in 2015 and later began medical school at NYITCOM, on the same campus where she received her undergraduate education.

Each March, soon-to-be medical school graduates learn where they’ll perform their residencies, and “Match Day” brought word that Gorton earned placement into the internal medicine residency at NEA Baptist Memorial Hospital, a program that was established in 2018.

She will begin her residency in July in her hometown, and when she completes it in 2025, Gorton will have amassed 24 years of education, all within Jonesboro.

“It truly is hard to believe,” Gorton said. “NYITCOM wasn’t in Jonesboro until I was in college, and my residency program didn’t exist until recently either. I’m the first person in my family to pursue medicine, so when you combine all of that, I never thought of it as a possibility. Then things started happening. A medical school opened here and new residencies were created. It was almost like destiny. I feel like I was meant to be at NYITCOM.”

Gorton grew up going to Arkansas State athletic events and was involved in programs on campus, so she never faced much of a decision when it came to choosing the next step after high school. She was set on attending the local university.

After earning her degree at A-State, Gorton spent two years working as a certified nursing assistant at NEA Baptist, which gave her an opportunity to learn and enhance her resume for medical school. In 2017, she was accepted into the second class at NYITCOM at A-State, which brought her back to the campus she’d grown to love.

“I had classes in Wilson Hall when I was a freshman at A-State, and at that time, there was a lot of chatter about NYITCOM coming here,” Gorton said. “I got to see the whole renovation and then being able to come back into the same building as a medical student was really cool.

“The connection is special for me because A-State gave me a great education that prepared me for NYITCOM, and now NYITCOM provided an outstanding experience that has prepared me for residency at NEA Baptist. I’m so grateful that NYITCOM came to Jonesboro, and I’m so appreciative of the fact that they believed in me and gave me a chance to earn my medical degree.”

While she’s open to possibilities, Gorton is currently focused on becoming a hospitalist once she completes her residency. And yes, she’d love to practice in the town where she’s spent the vast majority of her life.

“I just feel like Jonesboro has the perfect combination of family and quiet,” Gorton said. “You have the rural elements with the amenities of a bigger city. I received such a quality education at every level here, and you never know what the future holds, but I’d love a chance to stay here and serve this community as a physician.”

She hopes to serve as a role model for other Arkansans with similar aspirations.

“The fact that I’m the first person in my family to become a doctor and that I’m experiencing this journey in my hometown, I hope I can inspire other people to follow this path,” Gorton said. “There are great opportunities here. It’s not easy, but it’s possible. My story serves as proof of that.”