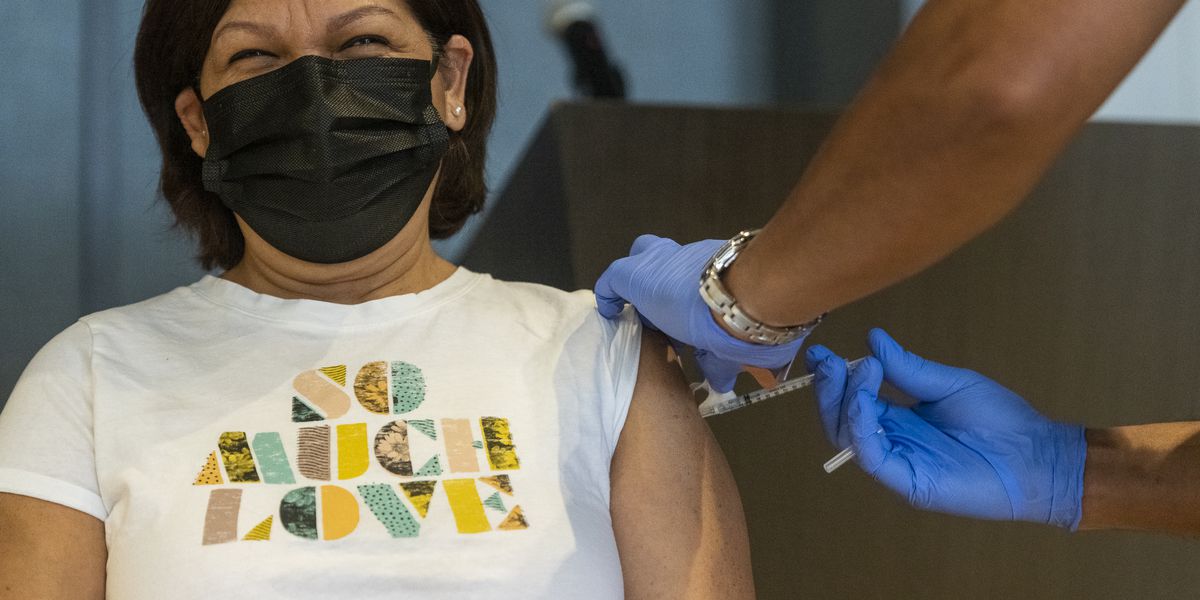 With the Pfizer vaccine receiving full approval from the Food and Drug Administration Monday, more and more local businesses are expected to put in place a vaccine mandate for employees.

The Chicago-based law firm, Sidley Austin, said Monday that vaccine mandates are now on the table at companies that hadn’t been considering them before.

Companies that previously feared mandates might spur litigation took the FDA announcement as “welcome news,” according to attorneys at the firm, which advises clients on mandate matters.

The firm said that mandates might help ease a return to work for vaccinated employees who object to working with unvaccinated colleagues.

Shortly after the FDA’s announcement, CVS, one of the nation’s largest pharmacy chains, said it would mandate vaccines for its nurses, care managers, pharmacists and corporate staff.

Chicago-based United Airlines, which earlier this month was the first major carrier to announce all employees needed to be vaccinated, moved its deadline to get the shots up by several weeks to Sept. 27 following the FDA announcement.

While the FDA announcement may prove important in the hastening of vaccine mandates, the trend gained traction late last month.

“The big companies doing it definitely gives a lot of other companies cover to go for it, so we’re definitely going to see more mandates, but it’s being restrained by other factors,” he said.

One mitigating factor: fear that companies might lose workers who are vaccine hesitant.

“There’s also a massive labor shortage going on and it’s really difficult for employers to find and retain people, so adding another hurdle in terms of this vaccine is a hard pill to swallow,” said Challenger, who noted that company mandates are not always being applied equally.

“Sometimes you’re seeing this division, where the vaccine mandate is for the corporate employees, but out in the stores where the labor shortage is most acute, where they’re really, really having a hard time filling those roles, they’re not instituting the mandate,” Challenger said.

For instance, Walmart, Uber and Lyft previously announced a vaccine mandate for corporate office employees but did not make the same requirement of their front-line workers who interact with customers.

Similarly, the CVS announcement didn’t include cashiers and other store workers.

Earlier this month, Deerfield-based Walgreens enacted a mandate that extends only to workers at their corporate offices.

Among Chicago restaurant groups, The Fifty/50 is one of the only ones to enact a vaccine mandate, which was announced to its more than 700 employees back in May.

“We may have been the first group to mandate it in the country,” said co-owner Scott Weiner.

“I can’t explain exactly why more aren’t doing it. I think some are saying, ‘It’s already hard enough to hire, we don’t want to limit our talent pool,’ or maybe they’re afraid someone’s going to sue them,” he said.

Sam Toia, head of the Illinois Restaurant Association, said the biggest operators in the city are currently mulling vaccine mandates.

A representative from Lettuce Entertain You Enterprises, which operates dozens of restaurants and bars in the Chicago area and other states, declined to comment.

“Each has to figure out what’s best for their team and their culture,” Toia said.

At least one recreational marijuana business that operates in Chicago has a vaccine mandate in place.

Dispensary 33, which operates two Chicago pot shops, has had the mandate in place for months, according to co-owner Bryan Zises. All employees are now inoculated except for two workers with medical exemptions.

“We require proof of vax to even be interviewed. … We need to be responsible and protect the health of the immuno-compromised medical [marijuana] patients,” Zises said.

But the same stringent requirements haven’t yet been adopted by some of the major players in the statewide industry, including Loop-based PharmaCann, which runs an Illinois greenhouse and eight dispensaries.

“I think it’s a polarizing and politicized issue right now,” said spokesman Jeremy Unruh. “We spent a lot of time providing vaccination information to our employees so that they’d have a clear path to vaccination … but we’re just not there yet in terms of mandating it.”

Cresco Labs, another Loop-based company with three cultivation centers and 10 pot stores statewide, is similarly focused on educating its workforce “on the efficacy of the vaccine,” spokesman Jason Erkes said.

“We are still evaluating all perspectives to determine whether or not we will be mandating it,” he added.

It’s important to note that employers will still have to make exceptions on a case-by-case basis for employees with religious or medical reasons for not getting vaccinated.