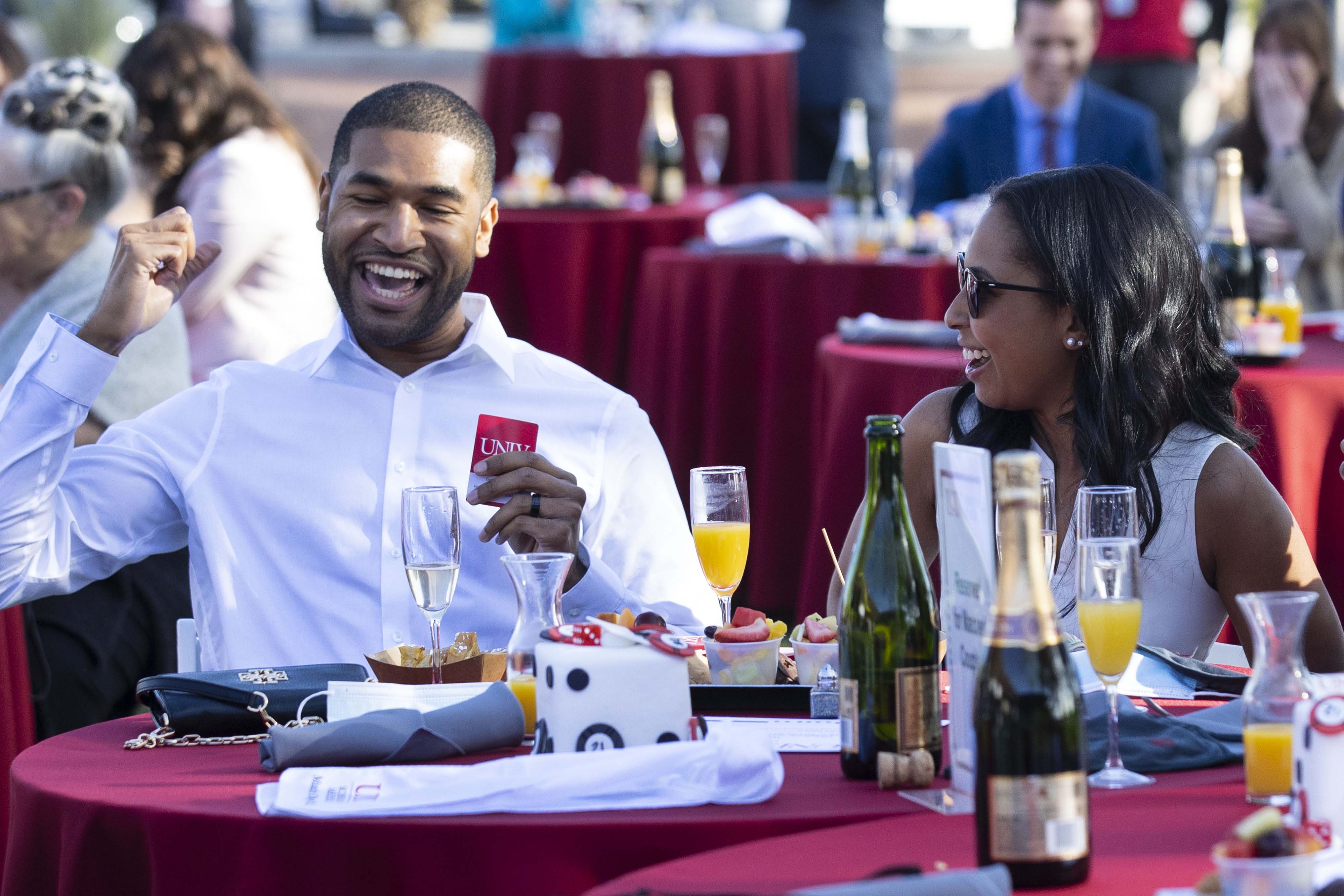 In the minutes before UNLV medical student Diana Peña found out where she’d matched for a pediatrics residency, the nervousness was kicking in.

Surrounded by her classmates Friday during a Match Day ceremony, the 27-year-old learned she’ll be at Stanford University in California — her first choice. She started crying and was wiping tears from her eyes.

“I didn’t think I would get that emotional,” she told the Review-Journal after the ceremony.

Fourth-year students in the UNLV School of Medicine’s first graduating class participated Friday in Match Day to find out where they’ll do their residency.

The school held a small outdoor ceremony at its Shadow Lane campus in central Las Vegas. Each student was allowed to invite one guest to the ceremony, which was streamed live online.

At 9 a.m., each student opened a deck of playing cards and pulled out one saying where they’ll spend the next three to seven years doing a residency in their chosen specialty.

Match Day happened Friday across the United States — and even internationally — for students to learn which U.S. residency program they’re matched with. Touro University Nevada in Henderson and University of Nevada, Reno, also held events.

Matches are determined using a mathematical algorithm by the nonprofit National Resident Matching Program, which factors in the preferences of applicants and residency program directors. Students who aren’t matched can then apply for unfilled positions.

UNLV’s first class of medical students will graduate in May. Before the medical school opened in 2017, Las Vegas was the largest metropolitan area in the country without an allopathic medical school — one that grants doctor of medicine (MD) degrees.

Dr. Neil Haycocks, vice dean for academic affairs and education with the UNLV School of Medicine, told attendees during Friday’s Match Day event, “It is truly historic, both for the school and city of Las Vegas.”

Every student in the graduating class matched with a residency, Haycocks said.

Medical school Dean Dr. Marc Kahn said many top students will be staying at UNLV for their residency. And he encouraged those leaving to come back to Las Vegas when they’re done.

“We have a community that needs you,” he said.

Students spent a few months interviewing with residency programs around the United States — a process done largely virtually due to the COVID-19 pandemic.

More than half of soon-to-be graduates — 28 — are doing a residency in a primary care specialty, which includes family medicine, internal medicine, obstetrics and gynecology, and pediatrics.

Getting a residency match

Married couple Damien Medrano and Lauren Hollifield, both 29, matched at the University of Pennsylvania — Medrano in radiology and Hollifield, who grew up in Las Vegas, in anesthesiology.

The couple — which met during their undergraduate years at Loyola Marymount University in California — both earned a master’s degree from Drexel University in Philadelphia and started medical school at UNLV at the same time. They were married in December 2019.

After getting their Match Day results, Medrano said it was a big step as they wrap up medical school. “It’s great to complete that trilogy.”

Sierra Mastrantonio, 31, was matched with University of Utah for anesthesiology — her first choice.

“I’m super excited,” she said, although she noted she would have been happy with any of her top five choices.

Mastrantonio told the Review-Journal after the ceremony that she was so scared and stressed before finding out where she’d been matched.

Four years of medical school built up to that moment, she said, and she thinks it’s even more significant than graduation.

Mastrantonio, who grew up in Las Vegas, graduated with an undergraduate degree from UNR and then worked for about six years — as a medical assistant and 9-1-1 dispatcher — before entering medical school.

Peña said she was attracted to the residency program at Stanford because it has a children’s hospital that treats a wide range of illnesses and she thinks that experience will make her a more well-rounded, complete physician.

She said she also loves its work around diversity, equity and inclusion, and its advocacy program.

Being part of the UNLV medical school’s charter class was a “roller coaster experience,” Peña said.

She said she was thankful to be able to stay locally with family — she moved to Las Vegas 14 years ago as a teenager — and she loves the medical school’s new take on curriculum.

As the first class, though, there were bumps in the road since students were the first to go through everything, Peña said, but noted the school was receptive to feedback. “It was an interesting journey.”

About 14 percent of UNR’s 2021 graduating class will be in Nevada for at least some of their residency, the university said in a news release. And nearly 50 percent are in specialties in primary care and mental health.

Touro held a virtual event for its approximately 130 graduating students and their families. Students received a text message or email at 9 a.m. from the National Resident Matching Program with news about where they’d been matched.

“There is nothing more emotionally laden than the Match Day, where our students who have worked so hard over years find out where they will be going next,” Dr. Wolfgang Gilliar, dean of Touro’s College of Osteopathic Medicine, told the Review-Journal on Thursday.

It’s the moment when becoming a physician becomes a reality, Gilliar said, calling it a “phenomenal moment.”

During the COVID-19 pandemic, it’s especially important to celebrate students’ dedication, Gilliar said. Medical students have stepped up during the pandemic, he said, including building COVID-19 testing kits, and providing testing and vaccinations.

“They are the ones who guide us,” he said. “It’s appropriate to applaud them for what they’ve done.”