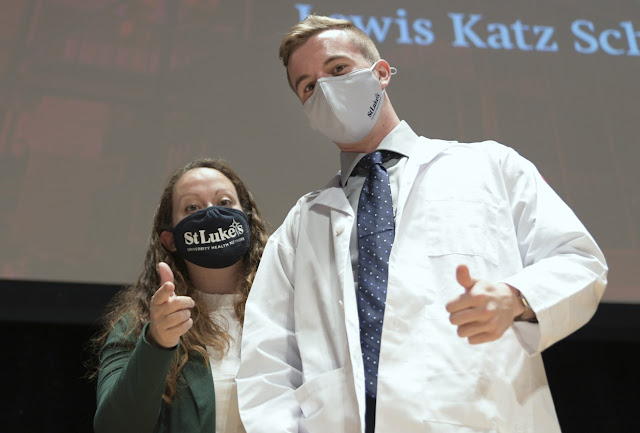 You could say Riley McHugh went to the school of hard knocks on his path to becoming a member of the 2021 class of Temple/St. Luke’s School of Medicine. The 22-year-old Tamaqua-born man donned his iconic white coat for the first time in the traditional ceremony for first-year med students on Aug. 6 in Philadelphia.
McHugh was inspired to become a doctor after suffering at least four concussions in his scholastic soccer career, one memorable one that landed him in the ER at St. Luke’s Miners Campus.

A key driver in his choice to go into medicine, he cites, was the empathy, care and counsel he received from a neurologist at Miners after McHugh caught a knee to his noggin during a game with Tamaqua High School in his sophomore year. The after-effects were dramatic.

“I was feeling isolated and confused and he told me, ‘It’s ok to not feel right,’ which made me feel better right away,” says McHugh, who now lives in Bethlehem. He hopes to eventually treat injured patients in his hometown and the nearby area the way the doctor helped him.

The 2021 Moravian College grad is aiming high professionally. He plans to become a pediatric neurologist to help youngsters recover from the kind of head trauma that comes often with sports, doing research, too, on how young brains develop post-concussions. He wants to let patients know, like his ER neurologist did, that “feeling out of it after getting your brains scrambled is normal” and how to rest and recover from the injury.

McHugh has embraced the rigors of medical school, the classroom and bedside learning, along with 39 other first-year students. He loves learning, especially the sciences, though he excels, too, in interpersonal communication, both critical skills for physicians. Most of his tuition for the four years is being funded by a generous scholarship from the John E. Morgan Fund, for which he is grateful beyond words.

He realizes the path to his goal will be long and demanding in and after medical school: three to four years of residency, followed by one or two years of fellowship. But he’s committed to learning and caring for people for the long run, even if it takes sacrifices.

He’s philosophical, saying that “It could always be worse,” something he learned being raised alone by his mother after the death of his father when he was just 8 years old. “She gave up so much for me,” he says.

Returning as a doctor to the medically underserved Tamaqua area will be the zenith of McHugh’s career, helping his family’s community overcome chronic diseases like diabetes, obesity, heart disease, alcohol and drug use.

“At Lewis Katz School of Medicine/St Luke’s University Health Network, we are incredibly committed to and proud of retaining our local students on their medical school journey, so they can ultimately take care of their own community,” says Shaden Eldakar-Hein, MD, MS, senior associate dean of the medical school. “Students like Riley are great assets to their neighbors, their class, the network and the medical school.”

McHugh thinks he’ll be stronger emotionally and more able to empathize with the people and their health challenges there having grown up among them and overcome no small dose of adversity himself.

“You’ve survived 100 percent of your worst days already,” he likes to say to provide perspective and reflect the mental toughness he has had to learn. “I feel fortunate I didn’t have everything handed to me.”