Findings from a study conducted in the UK support the country’s decision to extend the dosing interval of coronavirus disease 2019 (COVID-19) vaccination from 3 weeks to 12 weeks in order to prioritize the first dose for those at high risk of severe disease and death.

In January 2021, the UK government made the controversial decision to prioritize first-dose delivery of the Pfizer-BioNTech (BNT162b2) and AstraZeneca (AZD1222) vaccines by extending the initial 3-week interval until the second dose to a 12-week one.

Now, a team from Public Health England in London and Manchester, Brondesbury Medical Center in London, the University of Birmingham and St. George’s University of London have compared serologic antibody responses among 750 individuals who received the vaccines at varying dosing intervals.

For both the BNT162b2 and AZD1222 products, vaccine efficacy was higher across all age groups from 14 days after the second dose, compared with the first dose. However, the magnitude of this effect varied depending on the dosing interval.

The two-dose efficacy of BNT162b2 was higher with a dosing interval of more than six weeks, compared with a 3-week interval, including among those aged 80 years or older.

“Our findings support the UK approach of prioritizing the first dose of COVID-19 vaccines, with evidence of higher protection following extended schedules,” writes the team. “Given global vaccine constraints, these results are relevant to policymakers, especially with highly transmissible variants and rising incidence in many countries.”

A pre-print version of the research paper is available on the medRxiv* server, while the article undergoes peer review.

Older adults have been disproportionately affected by the COVID-19 pandemic

Since age is the most important risk factor for severe COVID-19, hospitalization and death, older adults have been disproportionately affected by the pandemic.

When the COVID-19 immunization program began in the UK on December 8th, 2020, older adults were initially prioritized to receive two doses of BNT162b2, separated by a 3-week interval.

From January 4th, 2021, AstraZeneca’s AZD1222 product was also deployed for use in care homes and among community healthcare professionals and healthy adults aged 40 to 60.

Also, in January 2021, the UK Joint Committee on Vaccination and Immunization decided that, given the emergence of a second epidemic wave, the delivery of the second vaccine dose should be extended for up to 12 weeks to prioritize the first dose for individuals at high risk of severe disease and death.

This decision was based on early clinical trial data indicating a vaccine efficacy of almost 90% within 3 weeks of the first BNT162b2 dose, compared with 95% from two weeks following the second dose. Fast prioritization of high-risk individuals for a single dose was expected to prevent more cases, hospitalizations and deaths than two doses given at a 3-week interval.

“This unique approach against authorized use and without formal clinical trials resulted in considerable international debate and prompted the need to evaluate immune responses and vaccine effectiveness following extended schedules,” says Amirthalingam and colleagues.

What did the current study involve?

The researchers compared serologic responses among 750 adults, aged 50 to 89 years, who received two doses of BNT162b2 (n=421) or AZD1222 (n=329) at different intervals during the national COVID-19 vaccination roll-out in the UK.

For BNT162b2, the single-dose vaccine efficacy was 53 to 58% after 28 days across all age groups, with no evidence of a decline in efficacy with age and only a modest decline beyond 56 to 76 days.

For AZD1222, the single-dose efficacy was 43 to 55% after 28 days, with some evidence of a decline amongst the oldest age group after 10 weeks.

Among the BNT162b2 recipients, antibody titers were 8-10 fold higher after a second dose was administered at a 6-9 or 10-13 week interval, compared with a 3-week interval.

Among AZD1222 recipients, antibody titers were 2-fold higher after a second dose was administered at a 10-13 week interval, compared with a 6-9 week interval. 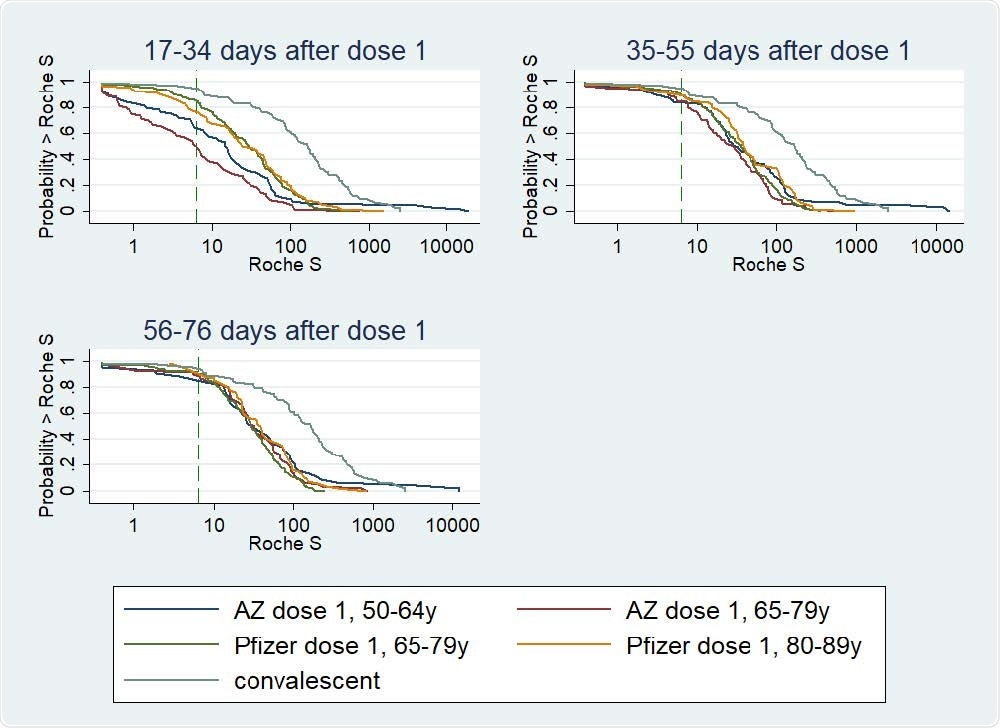 Amirthalingam and colleagues say the findings support the UK’s decision to prioritize the first dose of COVID-19 vaccines by delaying the second dose.

“Given the global vaccine constraints, these results are relevant to policymakers in low- and middle-income countries, especially in the context of highly transmissible variants and rising incidence in many parts of the world,” they write.

The researchers say that an additional yet undervalued benefit of extended schedules is improved efficacy after two doses of either vaccine, which potentially confer protection for a longer duration than short-interval schedules.

“Ongoing evaluation of the protection conferred against new variants using an extended schedule will be critical,” concludes the team.

medRxiv publishes preliminary scientific reports that are not peer-reviewed and, therefore, should not be regarded as conclusive, guide clinical practice/health-related behavior, or treated as established information.

Why are Biostatistics Essential for Successful Clinical Trial Management?

The Innovations of Healthcare – Bestgamingpro

Neurons in visual cortex of the brain change their responses over time, research reveals