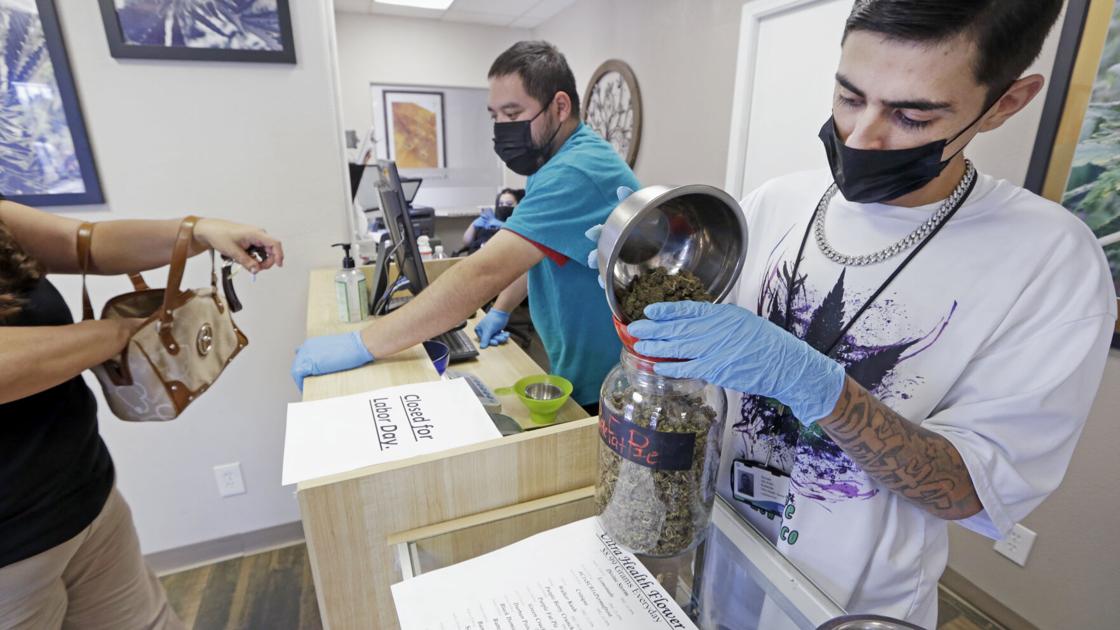 When Krispy Kreme arrived in Santa Fe in 2015, about 150 people camped outside the store the night before it opened to make sure they got their freshly made doughnuts.

We should expect the same with cannabis once recreational sales begin in April, state officials say.

Yes, there could be a shortage at first, they warn. But it will eventually level out and there will be plenty of cannabis for everyone, they say.

“We believe that there is a possibility that some shops will sell high quantities in the first week of cannabis sales,” said Linda Trujillo, superintendent of the state Regulation and Licensing Department, which has opened a Cannabis Control Division to oversee the new industry.

“But just like with Krispy Kreme, where they make more doughnuts the next day or hour after [the initial surge], we think there will be enough cannabis in the pipeline that there will be enough for the demand,” she said last month as her agency released rules for cannabis producers to follow.

Days after the first producer applications made their way to the Cannabis Control Division, it may seem premature, even absurd, to worry about whether there will be enough cannabis to go around in April, when retailers are scheduled to start selling their product.

But some major players in the state’s medical cannabis program are voicing concern. If there’s not enough cannabis on hand when sales begin, it could make it difficult for everyone, including the state’s roughly 121,000 medical cannabis patients, to get necessary product, they say. And if the state falls behind in its production capacities, it could take a long time to catch up.

“The adult [recreational] program will introduce new demands and push us into a significant deficit of product immediately, from Day One,” said Duke Rodriguez, president and CEO of New Mexico Top Organics-Ultra Health, the state’s top medical cannabis company.

That deficit, he added, “will continue to exacerbate.”

“We have a big facility ready to go [for recreational cannabis],” he said, “and even with our existing facilities, we won’t even have enough time to turn out enough.”

“The timing is terrible,” he said of the timetable between the state approving rules last month and accepting applications and the expected turnaround of ample product by April 1.

In Illinois, where lawmakers only approved 30 producers to cultivate cannabis, shops sold an astounding $39.2 million in product statewide that January. The following month, that figure was around $35 million.

In both states, shortages quickly became a reality.

States with cannabis shortages often owe their troubles to “legislators trying to rush the market into existence,” he said. “If you pass a bill and you want the effective date to be six or eight months from then, that requires a lot of legwork because it takes time for licenses to get built up.”

In New Mexico, Gov. Michelle Lujan Grisham signed the Cannabis Regulation Act into law in April. She called for a special session in March to legalize cannabis after previous efforts failed.

Under the law, producers can cultivate up to 8,000 plants per year and request an increase over the next two years, for a total of 10,000 plants.

Supporters of the initiative applauded the fast-paced timeline while the Cannabis Control Division was created to oversee the program and set rules for producers, manufacturers, retailers and other businesses involved in the operation.

Part of the challenge with the fast-approaching deadline, Rodriguez and others concerned about a shortage say, is the amount of time it takes to produce a full harvest of cannabis ready for sale. Rodriguez said even if the Cannabis Control Division approves the first wave of applications within 30 days or so, there’s still a lot of work for newcomers to the business to do.

New applicants will need to invest in the required property and water rights, as well as security measures, to get going by that date, he said. Even if they are ready to go, assuming they are going to grow indoors, it’s going to take nearly half a year to produce their first full crop of ready-to-sell cannabis.

A 2020 Colorado Department of Revenue report on cannabis growth said the average life cycle of cannabis harvesting is 125 days. That does not include additional time needed for curing, drying, testing and packaging, Rodriguez said. He and Lawrence said it’s not unrealistic to assume it takes five months or so to get a full harvest together.

The harvest will be produced in waves as the plants mature, ensuring a steady supply for the state, Trujillo said.

She said her agency will prioritize approving applications that came in early.

Ben Lewinger, executive director of the New Mexico Cannabis Chamber of Commerce, applauded the state requirement that recreational cannabis producers set aside up to 25 percent of their product for medical patients.

“There’s no way we don’t have some kind of supply constraint scenario,” Lewinger said. “That’s something every state has faced when they legalize. That’s why that piece in the law about reserving up to 25 percent of product for cannabis patients is so important.”

Rodriguez said it’s not the percentage that counts, but the actual amount of cannabis being produced come April. “In those early months, medical sales will already be the preponderance of the total sales,” he wrote in an email. “The added adult sales will only get us to a shortage sooner, deeper and more prolonged.”

Others said a shortage is inevitable and unlikely to cause any real problems. John Kagia, chief knowledge officer with the Washington, D.C.-based cannabis analytics and research firm New Frontier Data, has been studying the impact of legalized cannabis programs around the world.

Based on his group’s analysis, legal cannabis users make up around 12 percent of a state’s population. Most states have no more than 2 percent of their population using medical cannabis.

In New Mexico, the medical cannabis rate is closer to 6 percent, meaning a jump to twice that amount should not be so difficult to attain, he said. And recreational users relying on the black market are not likely to switch to the legal market right away, he said.

In Colorado, where sales became legal in 2014, it took about four to five years for the legal cannabis market to overtake the illicit market, Kagia said. And by his group’s estimate, the Colorado legal trade is serving 80 percent of all users, meaning about a fifth are still relying on the illicit market, particularly if the product is cheaper.

One potentially interesting run on New Mexico product could come from Texas residents willing to cross the state line to buy cannabis — much like some New Mexicans do now in Colorado. The cannabis tourism trade, he said, could impact initial sales.

Greathouse said he expects 50 percent of his new clients to come from Texas once sales begin in the spring.

In terms of offsetting any possible shortage, Rodriguez said the state could issue emergency provisions allowing producers to exceed the 8,000 to 10,000 cap.

Lewinger said one option may be for legislators, when they meet in January, to postpone the retail date to give producers more time.

“That could be part of the discussion,” he said.

But he also thinks any shortage is not going to be a big deal in the long run.

“In five years’ time, when we have a fully cannabis market, we’re going to realize a couple of months of being short on supply was not the worst thing that could happen,” he said.