Out of the ashes: KCU breaks ground on Joplin dental school | Local News 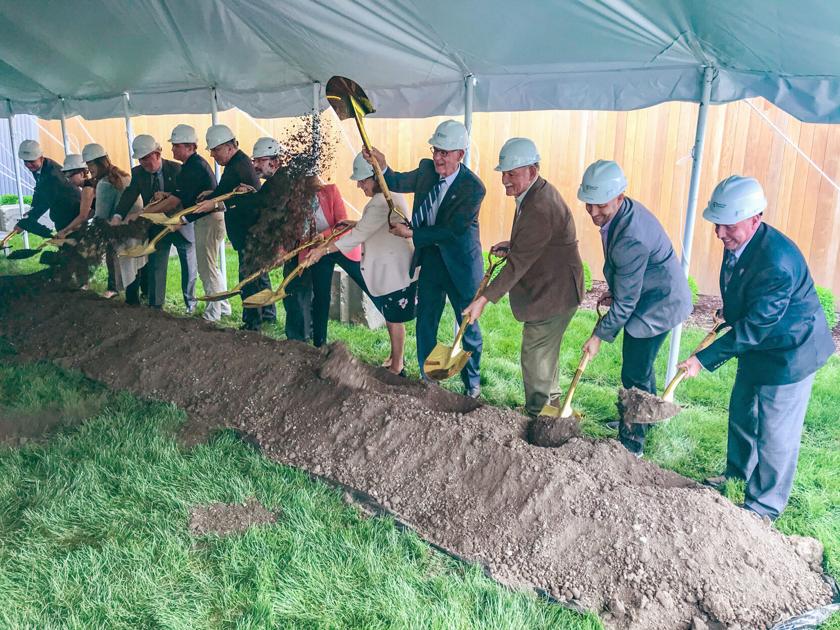 On the 10th anniversary of one of the most terrible days in Joplin history, standing in front of a medical school installed in an emergency hospital built to help the city recover, community leaders, medical professionals and others embraced a future dental school and remembered those who lost their lives in the Joplin tornado.

KCU Joplin held a ceremonial groundbreaking for the new College of Dental Medicine on Saturday, the 10th anniversary of the tornado that killed 161 people and left a third of the community in ruins.

Dr. Marc Hahn, president and CEO of Kansas City University, made sure to remember that day at the start of a ceremony meant as a happy occasion to celebrate a huge milestone in education and the medical community in Joplin.

“We traditionally start a ceremony like this with a moment of silence,” Hahn said. “Today, this moment of silence is to honor those men, women and children whose lives were lost 10 years ago today, along with thanking those heroes, those first responders, the doctors, nurses, military and health care professionals who are ever-present when the moment comes.”

Construction began a few weeks ago on the $80 million addition to the Farber-McIntire campus of the KCU Joplin medical school that will house the new College of Dental Medicine.

Hahn said the dental school’s completion in 2023 will make Joplin the smallest community in the U.S. to sport a medical and dental school, a distinction of which Joplin should be proud.

Half the cost of the building is being funded by $40 million in private donations, according to Rudy Farber, Neosho banker and a representative of the Joplin Regional Medical School Alliance, the private group that has pushed for about a decade the idea of a medical school in Joplin.

“It is an amazing day and one that I think very few people contemplated when we dedicated the medical school,” Farber said. “I view this as a great gift from KCU to our entire region. It’s going to have many, many good effects in terms of oral health, and I think we should be very, very grateful to KCU for making this opportunity possible for us.”

Out of the ashes

It was impossible for KCU officials to talk about the construction of a dental school without also talking about the events of May 22, 2011, the effects of which are still being felt in Joplin today.

In fact, the KCU medical school, which opened in 2017 and graduated its first class of doctors only two weeks ago, was built in a temporary component hospital, assembled in 2012 out of modules built elsewhere and trucked to Joplin.

That building served as Mercy Joplin’s temporary bridge from St. John’s Regional Medical Center, which was destroyed in the tornado, to the current Mercy Joplin Hospital at the intersection of Interstate 44 and South Main Street.

Soon after it was built, it was decided that the original plans to disassemble the hospital after Mercy was finished with it and take it somewhere else was prohibitively expensive, so Mercy gifted the building and land to KCU to build a medical school.

“I never imagined eight years ago we would be standing here today commemorating both the losses felt two years before and also breaking ground on a new college of dental medicine,” Hahn said. “From the tragedy that was felt here on this very ground 10 years ago today, who could have imagined the rebirth, the rebirth that is Kansas City University’s Farber-McIntire campus, the college of osteopathic medicine, and now a college of dental medicine? This is truly like the mythical phoenix arising from what had been the ashes of the former St. John’s Hospital standing on these grounds.”

Eastern Shawnee Chief Glenna Wallace, a member of KCU’s board of directors, said she expects the new dental school to have a huge impact on the health of the communities around Joplin.

“We know there is a need, we know it’s a need that’s not being met and has not been met, and we are hoping we can recruit Native American students who will become students here and realize there are opportunities for them,” Wallace said. “Certainly when we talk about people being underrepresented, Native Americans are underrepresented in almost all areas when we talk about professional occupations.”

Hahn said all the counties within a 100-mile radius of Joplin are listed by the federal government as dental health professional shortage areas.

Niessen said the school’s curriculum will send fourth-year students into communities to work with professional dentists and learn hands-on from those professionals how to be dentists in the community.

KCU says the first class of about 80 students will be enrolled in the College of Dental Medicine in August 2023. Because of the COVID-19 pandemic, the building’s design was altered in the past year for added safety measures in case of a future public health crisis.