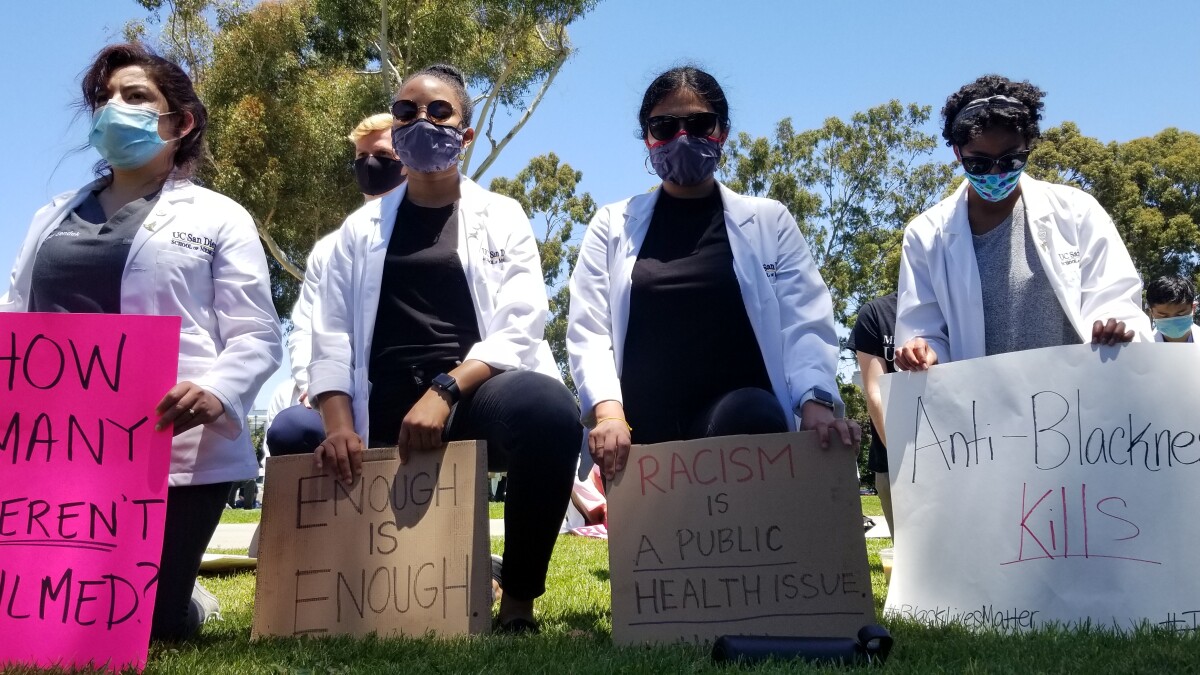 The hint of an education on race and racism I received in medical school involved a historical overview of the Tuskegee syphilis experiment and retired eugenics practices. As I rotated on the wards, race came up again as a vague tool to help narrow a diagnosis. New Black patient with severe headache, blurry vision? Think hypertensive crisis.

I wasn’t taught why hypertension might be more prevalent in the Black American population. (Hint: Genetics is not the answer.)

I was never taught that Black newborns delivered by a white doctor are more likely to die than those delivered by a Black doctor. Or that federally sanctioned redlining in the 1930s still increases the odds of Black-majority neighborhoods having shorter life expectancies.

And so began my real training. I entered internal medicine residency in 2016, treating a predominantly underserved Black population in Baltimore. Medical school had wholly unprepared me for the constructs of racism woven into quotidian healthcare, but I strove to learn from on-the-ground experience, from my many mentors dedicated to our local community and from the academic literature I later discovered as I was pursuing a master’s of public health.

For example, throughout residency, I advocated for incarcerated patients who were handcuffed to their hospital beds. When Jacob Blake, a Black man who was paralyzed after being shot by a white police officer — and who posed no immediate threat to hospital staff — was handcuffed to his hospital bed last August in Milwaukee, many people began to see those shackles as a symbolic manifestation of underlying racism in medicine.

But it shouldn’t take a national scandal like the Blake case for physicians to see our healthcare system for what it is — and to try to change it.

Critical race theory, or CRT, helps us better understand these systemic racial inequities in the United States. Beyond merely recognizing their existence, it can guide us on how to dismantle them. How would this translate to medical school curricula? For starters, race would be taught as a social, not a biological, construct.

In healthcare, this has implications for the framing of diseases, such as hypertension, which is presented as “more common” among Black Americans. We hunt for a genetic basis, when the cause may be largely environmental and stems from historical patterns of disadvantage. Some diseases, like sickle cell anemia, have a genetic cause more prevalent among Black Americans, but most reflect inequities in social determinants of health, like neighborhood and income level.

Teaching CRT in medical school could lead to the elimination of separate standards for disease severity among Black patients — such as different thresholds for kidney function — which are rooted in debunked theories about inherent biological differences and can lead to improper dosage of medications and lack of access to lifesaving transplants.

CRT would also help bring the treatment of marginalized groups into the mainstream as students are taught to recognize patterns specific to these groups. For example, lesson plans would purposefully illustrate examples of rashes on dark skin that can manifest quite differently than they do on light skin, the current learning standard.

In medical curricula, CRT could address the systemic racism that has infiltrated our healthcare institutions. While training on implicit bias and diversity already highlights the consequences of racism at the individual level, it falls short of tackling institutional and structural racism. Lessons on the historical consequences of systemic racist practices could help the medical community find macro-level solutions.

In the U.S., a country with some of the worst health disparities in the world, CRT should be as fundamental to medical education as CPR — not reserved for specialized electives or urban health tracks. If it is not taught, health inequities will continue into future generations.

There is no better argument in favor of CRT than the fallout from COVID-19, which unfolded in real time, exposing a broken system as people of color were disproportionately affected by the coronavirus.

This was no coincidence — even the U.S. vaccine rollout plan discriminated against people of color and other marginalized groups. When the Centers for Disease Control and Prevention recommended that those 75 and older be among the first to receive the vaccine, the policy failed to take into account the gaps in life expectancy between white and Black men. In Los Angeles County, the average life expectancy for white males is 78.9 years, compared with 72.3 for Black males. That policy meant some Black Americans likely did not live long enough to receive the vaccine.

When we talk about “institutionalized racism” in healthcare, that institution is led by doctors, and we have the power — and the responsibility — to advocate for change. If CRT were to become integral to medical education, it could help doctors do what they set out to do: Heal all patients equitably.

Trisha Pasricha is a physician and research fellow in gastroenterology at Massachusetts General Hospital.