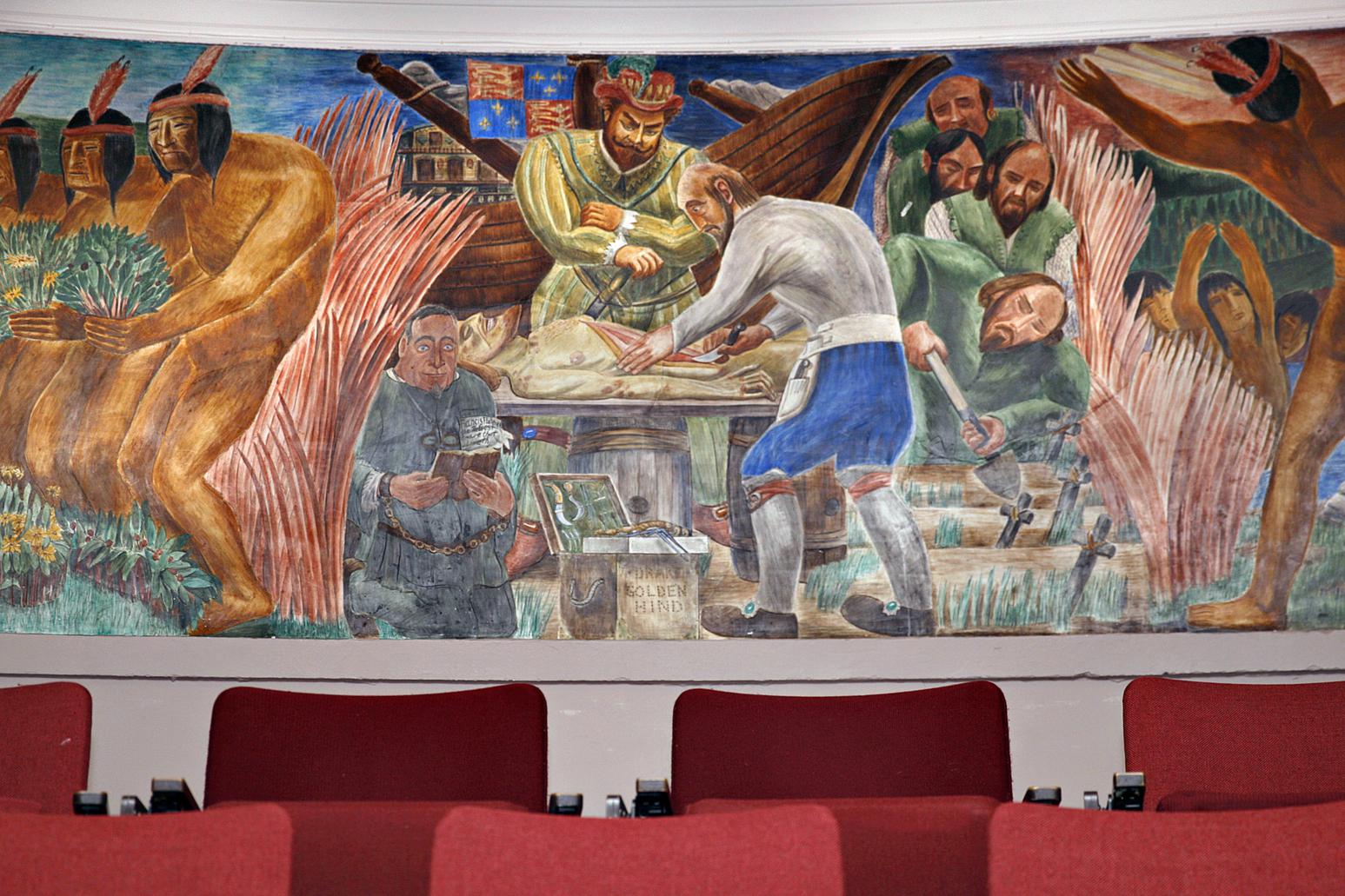 Work to remove the New Deal-era frescoes depicting the “History of Medicine in California” from the UCSF medical school Parnassus campus has been temporarily halted by court order.

The motion for a restraining order, requested by San Franciscans for Balanced and Livable Communities in a bid to stop construction of a new hospital complex, was granted by Alameda County Superior Court Judge Frank Roesch. It prohibits any “construction or demolition activities … that relate to the execution of plans to remove the … murals from their present location in UCSF Toland Hall until a preliminary injunction hearing can be held on Sept. 16,” read the decision by Roesch.

The restraining order put an immediate stop to a $3.2 million project begun in January to remove and store the 10-panel fresco painted in 1938 by Bernard Zakheim.

The panels are located inside a medical school building, Toland Hall, which was deemed seismically unsafe and is scheduled for demolition next year. The skylight has been lifted off Toland Hall to create an opening large enough to extricate the panels by crane. Work was underway to cut the murals out of the wall in preparation to be airlifted. That project was suspended by the court order, and the skylight opening covered by plywood.

According to UCSF spokesperson Kristen Bole, the murals themselves have three layers of protection. Descendants of the artist and the head of the conservation firm hired to remove the art fear that protection is insufficient.

“It exposes the murals to the range of elements and that is very disheartening thing for my family to hear,” Adam Gottstein, grandson of the artist Zakheim and family spokesperson, said. The family was not a plaintiff in the suit but generally supports efforts to keep the murals where they are, Gottstein said.

A delay in the removal project may cause “irreparable harm to the murals,” said David Wessel, principal of Architectural Resources Group Conservation Services. As a witness opposed to the restraining order, Wessel noted that the project will now have to be postponed until spring, 2022, after the rainy season. He said water from building leaks already has damaged the murals.

The climate-control system in the building has been removed, putting the art at further risk, Bole said. The delay, with a crane already on-site, is expected to cost an additional $200,000 and that number will rise if the roof requires a more permanent solution to get through the winter.

The motion to save the murals is part of a larger strategy to stop expansion and redevelopment of the UCSF campus in Parnassus Heights. In February, three neighborhood organizations — San Franciscans for Balanced and Livable Communities, the Parnassus Neighborhood Coalition, and Yerba Buena Neighborhood Consortium — each sued to overturn the Board of Regents decision to allow construction of a 2 million-square-foot hospital and medical center in the already dense Parnassus Heights neighborhood, to the south of Kezar Stadium in Golden Gate Park.

The removal of the murals is “the tip of the spear,” said Patrick Soluri, attorney for the Parnassus Neighborhood Coalition.

“The only aspect of the project that is going forward was the removal of the Zakheim murals,” Soluri told The Chronicle. The court order “stops construction and preserves the status quo until the preliminary injunction can be ruled upon.”

UCSF said it would abide by the judge’s order to halt the mural removal. But the administration disputes that this order stops the plan to demolish Toland Hall and replace it with a new hospital.

It was “inaccurate and misleading to claim that the temporary order applies to anything other than the temporary suspension of work on removing the murals until the Alameda Court can review the PNC’s request against the facts,” Bole said.