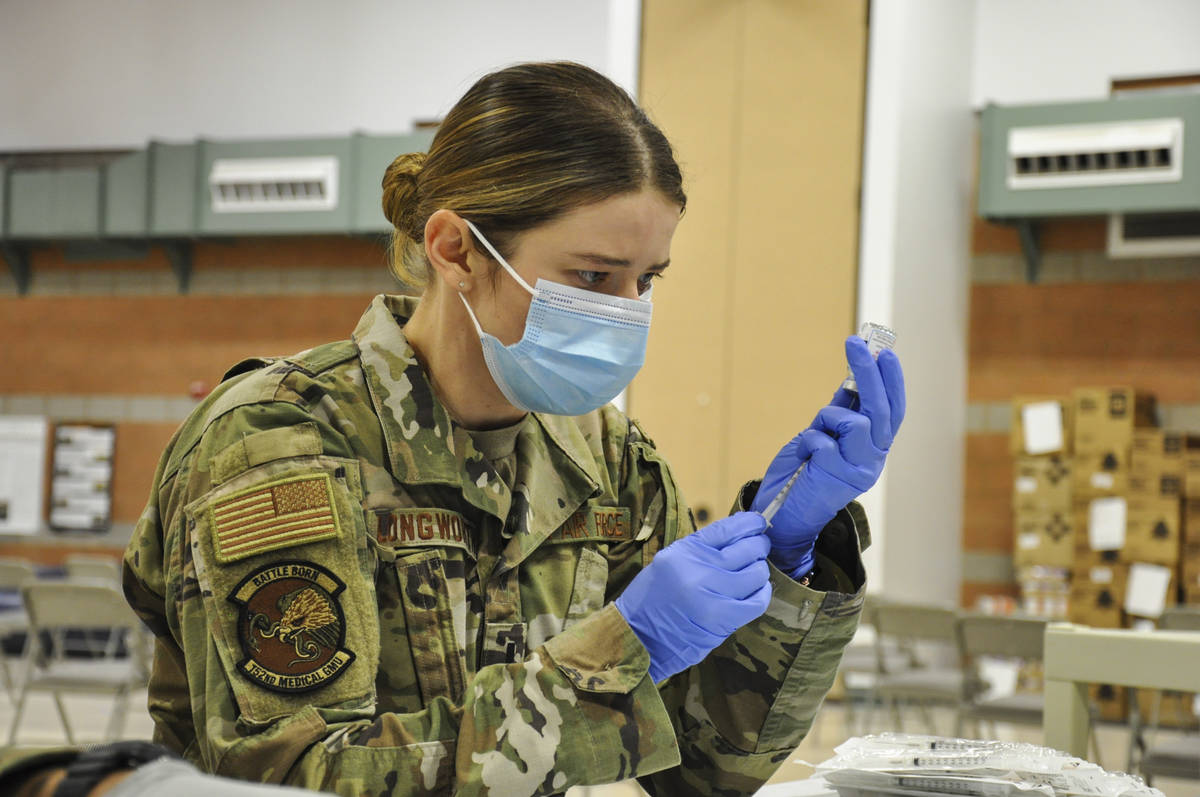 Nevada Air Guard Capt. Caleena Longworth knew at the age of 10 that she wanted to be a doctor, and by January of this year, in the final semester of her medical doctorate program, she was one class away.

With the class not set to begin until April, UNLV’s Kirk Kerkorian School of Medicine offered her a two-month vacation. Instead, Longworth, an Air Force veteran and native of Reno, started administering thousands of vaccinations to Nevadans at Cashman Center.

“It’s one of those things where you have a skill set and your community really needs it,” Longworth said. “If you don’t have enough vaccinators, that’s more people that have to wait the next day, more weeks that the state gets pushed off of reopening and longer that grandparents can’t be reunited with their grandchildren.”

Longworth has kept herself busy with National Guard activations during the pandemic, first in April 2020 when she helped establish and was the officer in charge of the first Community Based Collection Site in Southern Nevada, where COVID-19 testing was performed. Then, in January, she reactivated.

In between, she also administered vaccines on behalf of UNLV. All the while, Longworth was working through her doctorate program.

Guard officials said few people in the state have administered more vaccines than Longworth, who has vaccinated more than 4,000 people. While on duty, she picked up the nickname “Baby Doc” from her health care co-workers because of her youthful appearance.

Nevada Air Guard 2nd Lt. Samirah Furham, who oversaw the Cashman site, said that from the first day, Longworth proved to be a valuable asset and mentored others. Furham also noted that Longworth cultivated a nurturing environment and kept an “incredible level of professionalism.”

“Being a physician or being a medical student, you have to strive to be a pillar of your community and, during this mission, she certainly met that goal,” Furham said. “She definitely blew away expectations.”

If you ask friends and family, Longworth has shown a dedication to helping others throughout her life. Now, at 30, she is in the first few weeks of her residency at St. Mark’s Hospital in Mill Creek, Utah.

To call the journey challenging would be an understatement, Longworth said.

Her connection to medicine originated at birth, when Longworth was born with a health condition called duplex collecting system. The ailment, caused by an incomplete fusion of a kidney, results in painful and life-threatening infections.

Longworth had surgery at age 2 to remove the defective kidney but was left with a scar on the right side of her abdomen and a lasting interest in medical science. In the years that followed, Longworth said, people around her always seemed interested in the scar and its backstory.

“It was what made me special,” Longworth said. “I got that positive interaction with my doctor, and he was always like, ‘Oh, let’s see that scar that you’ve got,’ and it just made me feel unique.”

After graduating from high school, Longworth enlisted in the Air Force, where she served as a Spanish linguist. She called the prospect of having GI Bill college aid “an opportunity someone from her background couldn’t pass up.”

Longworth, the oldest of four sisters from a single mom, had spent most of her childhood living in low-income apartments and a double-wide trailer.

“We were on food stamps, and she was struggling paycheck to paycheck,” Longworth said. “I grew up, I would say, pretty poor, but as I’ve gotten older, I’ve realized how fortunate my childhood was. But I did have to find a way to pay for my education.”

After her enlistment, she enrolled at the University of Nevada, Reno to complete her degree in biology and met her now-husband, who was serving in the Nevada Air Guard. Longworth eventually would sign up, too. She’s been a part of the guard ever since and has no plans to stop.

“My brothers and sisters, we’re willing to die for each other, and just working alongside these amazing people from all walks of life is just something that you don’t really find at any other job, or place,” Longworth said. “I still want to serve my country in that capacity. I’m willing to deploy for my country, if that’s what they need.”