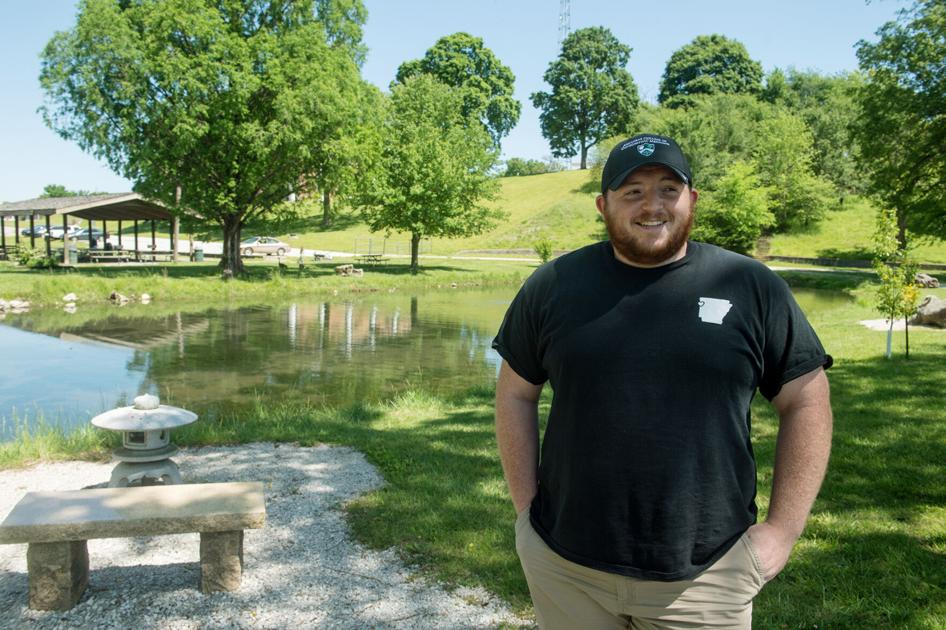 Sporting a hat and shirt from his future medical school, Missouri Southern State University senior Nathan Piccoli, 22, breathed a large sigh of relief Thursday after finishing his final exam of his undergraduate career.

“Especially since this morning, I’m on cloud nine,” he said with a smile. “Now, all of that stress from the last four years of my life is completely gone today, and I’m just living it up.”

Piccoli, of Osceola, has been selected as MSSU’s 2021 Outstanding Graduate by the Alumni Association’s Board, which annually honors the achievements of the top student. He’s graduating Saturday with a double major in biology and biochemistry — both with a pre-med emphasis — after completing 170 hours of credits while maintaining a 4.0 GPA.

“The competition is so crazy between me and all of my friends that I never expected to win this award because they’re all such great students,” Piccoli said. “Being nominated for this really means a lot because I know how great both our chemistry and biology departments are. It’s a really awesome feeling.”

The 76th commencement ceremony at MSSU will be offered as a walk-through celebration Saturday at the Leggett & Platt Athletic Center. There are 678 spring graduates and 102 summer graduates earning degrees.

MSSU was a no-brainer for Piccoli, who said he appreciated the smaller classroom sizes and one-on-one opportunities to interact with staff. He’s the treasurer of the Caduceus Club, a professional medical organization, and is a member of the Lion Ambassadors.

“I do a lot of studying,” he said. “Most of my time gets spent doing classwork, but when I have free time, that’s when I’m working on literally everything else. I’m also a student researcher with the reptilian physiology lab on campus, which takes up a lot of my time, too. I spend at least three hours a week in the lab.”

Piccoli said MSSU has provided several research opportunities most undergraduate schools don’t offer. He has published portions of his research work in two abstracts, served as a peer-reviewer for six journal submissions and received awards at the 2018 Kansas Herpetological Society’s annual meeting and the 2019 research symposium at MSSU. After graduation, Piccoli will attend Arkansas College of Osteopathic Medicine in Fort Smith to study orthopedic surgery. He said he has known he wanted to a doctor since his last year of high school. He then worked as a certified medical assistant at Golden Valley Medical Clinic in Clinton during breaks from college for three years.

The Missouri Southern Outstanding Graduate Award is given to a graduating senior each spring by the MSSU Alumni Association. The award recognizes an exceptional individual for their outstanding accomplishments in the classroom and for the significant contributions they have made to their university and community.

While taking Biology 110 with David Penning, an assistant professor of biology at MSSU, Piccoli said he took advantage of the opportunity to do research in the campus reptile lab. From there, he discovered other doors that led to new experiences.

“Nathan is quite simply the most cumulatively dominant student I have ever worked with across multiple universities,” Penning said in a statement.

“He has maintained a perfect 4.0 GPA and, in my opinion, outperformed all others in his devotion and efforts in scholarly activity, campus activities, leadership and mentorship.”