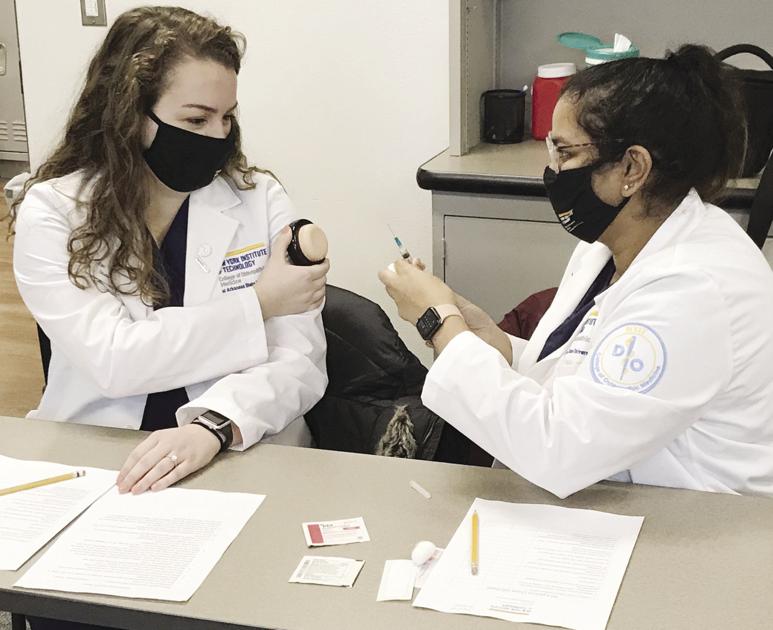 JONESBORO — In just a few months, the New York Institute of Technology College of Osteopathic Medicine at Arkansas State University will be graduating its second class of medical students.

What began as a discussion among the Arkansas State University System Board of Trustees a few years ago has now become a reality and a thriving part of Northeast Arkansas.

Dr. Shane Speights, dean of the NYIT College of Osteopathic Medicine, said in just four years, the school is starting to reap the rewards of sowing seeds into the community.

“We started Project Heart the first year, (2016-2017), an outreach program for students in high school. That’s how dedicated we were to make an impact in our community,” he said.

A lot of times students do not have anyone who tells them they have the option to become doctors, nurses or something else in the medical profession, he said.

“No one ever told these students they were smart enough,” Speights said. “We have to install the ‘I Can’ attitude into these students.”

Speights said one of the first ways the school began outreach for area high school students was to create opportunities. “They don’t have the opportunity to visit a medical school or college campus,” he said.

NYIT created the opportunity and, even in the light of the pandemic, found a way to continue the program this past summer.

“We sent packages out to students who wanted to participate in the summer camp this year, which included a model heart,” he said. “The anatomy professors taught the students via Zoom.”

Speights said one of the students who attended the first Project Heart camp the first year has graduated college and applied as a medical student at NYIT.

“Sometimes all it takes is a spark for a student to say that really impacted me,” he said. “The fruits of the labor are just beginning to pay off, and we haven’t even started yet.”

Speights said the medical students also have a clinic for students called “Structure, Function, and Technology.”

“It is a half-day program where our anatomy teachers teach students for half the day, then students get to go into the gross anatomy labs,” he said. “We are doing this for students from Brookland, GCT [Greene County Tech], Nettleton and Jonesboro schools.”

In addition to impacting students to become future doctors, Casey Pearce, associate director of external relations and marketing at NYIT, said student doctors have been volunteering to serve on the front lines during the pandemic. In November the school received a grant from the Arkansas Minority Health Commission to hold free testing events using the Delta-Care-a-Van, Pearce said.

“We have set up testing in Searcy, Marianna, Eudora, West Memphis, Harrisburg, Blytheville, and Wynne,” he added. Students also helped lead the vaccination clinic on March 6 at the First National Bank Arena.

“We had our Latino Student Medical Association volunteer to translate and obtain consent helping explain to our Hispanic population what (type of vaccination) they were getting,” he said.

Because the college received more vaccinations than could be administered on March 6, Pearce said students will continue to administer vaccines throughout the region.

“We have seven more events coming up,” he noted.

Speights said the college has big plans for the future to not only expand on existing programs but to establish new ones.

“We have much bigger plans for the school, the state, and region,” Speights said. “We plan to take what we have and expand it throughout the region.”

To really impact health care the medical school has to get into those regions, he said, noting some of the most underserved regions of the state are in the poorest rural communities.

“We are going to start sending people into those areas,” he said. “You have to realize our first priority is creating excellent physicians, but we can do a lot more than that.”