Local medical hemp business selling ‘Delta 8,’ but what is it? 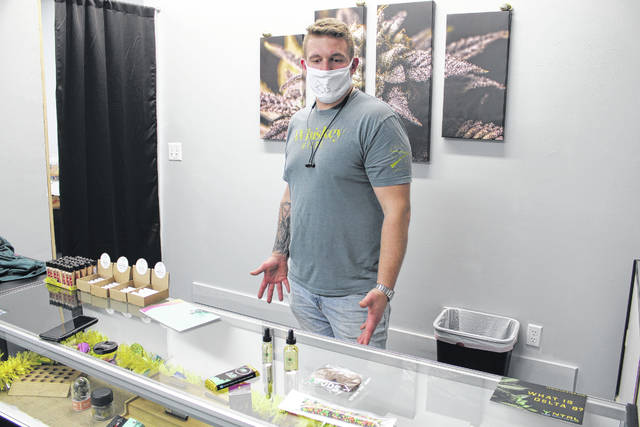 WYOMING — Area residents are able to walk into a West Side store and walk out with products that will get them high.

Perhaps not the same high one gets from marijuana, but high nonetheless.

But what is hemp, and how is the shop able to sell products with a psychoactive effect over the counter, without the need for a medical marijuana card?

The answer, ultimately, comes from a piece of Trump-era legislation, the 2018 U.S. Farm Bill, which descheduled certain cannabis products in the United States, namely hemp.

Theodore Lasher, 31, one of the store’s three owners, said that the hemp legalization is crucial to their business model. Lasher met with a Times Leader reporter on Thursday at the business’ Wyoming Avenue location.

“They could swing a gavel tomorrow, and that would be it; we would have to close up shop,” Lasher said. “But you can’t make a splash if you’re worried about jumping in.

“The hemp bill has been crucial; without that, we wouldn’t even have a chance,” he went on.

Since the legalization of hemp at the federal level in 2018, Pennsylvania’s Department of Agriculture now issues permits for the cultivation of hemp around the state. While hemp has plenty of industrial usages — State Rep. Eddie Day Pashinski, chair of the House Agriculture & Rural Affairs Committee, estimated during an interview for this piece that it has “thousands” of manufacturing applications — it can also be used as a medical product.

Some of the hemp products Lasher’s store sells are “Delta 8” hemp. Lasher explained that Delta 9 is the THC isomer that has the psychoactive effect in traditional marijuana, and Delta 8 is the type of THC found in his hemp products. Lasher said that the body absorbs the two molecules differently, and it causes different reactions.

Lasher said that Delta 9 THC is absorbed by the body more readily, causing a stronger psychoactive effect — the typical “high” — while Delta 8 does not get absorbed as much, with Lasher saying it more effectively targets the body’s responses to pain and anxiety but without causing as much of a high.

“It doesn’t give you that full, psychoactive anxious effect that Delta 9 would,” he said.

Lasher said that his store’s patients are typically interested in pain relief, anxiety issues, seizure disorders and help with numerous other medical conditions. Additionally, 3BUDS’ prices are lower than the medical marijuana dispensaries, with Lasher saying that his Delta 8 products can in some cases be significantly cheaper than comparable Delta 9 products at the dispensaries.

The store also sells the now-ubiquitous CBD products for those who are interested in those as well. And, unlike the Pennsylvania medical marijuana dispensaries, 3BUDS customers are able to order products online and have them delivered to their home. 3BUDS is allowed to deliver products in 42 of 50 states, Lasher said, explaining that some of those states, like Colorado, block sales from companies like his in order to keep money within the state-sanctioned marijuana system.

The store’s second location opened this week in downtown Scranton.

While Pashinski encouraged moderation when it comes to products such as these during a conversation in his Wilkes-Barre office on Friday afternoon, he also said that hemp’s uses amaze him.

“Hemp is an incredible product; literally, thousands of things,” he said.

Pashinski, who became chair of the House Agriculture & Rural Affairs Committee earlier this year, said he’s been astounded by the potential usages for hemp in industries like textiles, manufacturing and others, even noting that hemp can be used to make concrete.

Under Pennsylvania’s hemp guidelines, hemp lots must be below the 0.3% total THC compliance level.

“It took a long time to finally bring hemp back into the picture; we have the science and the ability to test and control, and as a result, things are opening up, not only for hemp, but also for medical marijuana, which has a tremendous value,” Pashinski said.

“It’s called progress,” he went on.

But Pashinski said that these products, and the companies that sell them, need to be well-regulated, so as to make sure what’s being sold is safe and also operating within the bounds of the current laws.