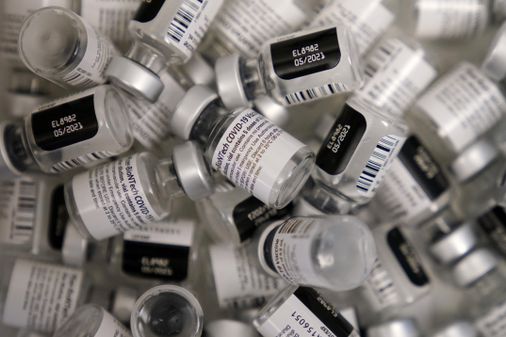 Getting supplies could be difficult, though. Governor Charlie Baker’s administration sent out a memo Wednesday night asking the business community to hold off on these efforts, saying there aren’t enough supplies right now to support employer-based vaccine programs. It’s a message that’s bound to disappoint many executives.

“Businesses would prefer to have these in-house if they could,” said Brian Johnson, president of the Massachusetts Medical Device Industry Council. “Companies want to get back on their feet. One CEO told me, ‘At least, I know if it’s in their face, that they’ll get their shots.’ ”

Dozens of life-sciences companies had been contemplating their own vaccine programs or teaming up with others to ensure their workers — many of whom still go to work in person in labs or factories — get vaccinated as quickly as possible.

Employer programs are still in the early stages. The logistics can be daunting. To administer shots, the state’s published guidelines require companies to have at least 200 workers — although smaller firms can band together — as well as proper refrigeration equipment and medical personnel.

Then there’s the issue of supply. The state acts as a conduit for vaccines distributed by the federal government and typically was getting nearly 110,000 first doses each week. State officials say this number, now closer to 140,000, meets only about a quarter of the demand.

“Given the continued and significant supply constraint, the Commonwealth continues to work with the business community on potential solutions for their employers,” Reilly said in an e-mail. “At this time, the state is focusing on the efficient, effective and equitable distribution of vaccines through sites that are open to all residents.”

Many smaller biotechs are taking what industry consultant Jodie Morrison calls a “parallel track” approach. They’re joining together to plan “pop up” vaccination centers, but also hoping employees can use a mass vaccination site. Morrison leads the COVID-19 CEO Forum, an informal group of about 150 biotechs that share tips for navigating the pandemic. Emerging from those talks: plans for a vaccination hub in Watertown to support about 50 biotechs, assuming supplies are available, using a state-approved independent pharmacy, Morrison said.

Lyndra Therapeutics chief executive Patricia Hurter said one possible location for such a clinic is the Arsenal complex in Watertown. Hurter remains hopeful that biotech employees can access the vaccine by the end of March. Morrison said she knows of several other biotech clusters that are working with large primary-care providers.

Another option suggested by Frequency Therapeutics chief executive David Lucchino would be for lab landlords to take the lead. His company employs 82 people, but he estimates more than 500 work in biotech in the Woburn building where Frequency is located.

“If we can loosen the burden for the state-run hubs, that’s a win-win for the state,” Morrison said. “We’ve done a good job of getting essential workers back into the labs, utilizing testing on a regular basis. . . . When biotech is open [for vaccinations], we want to make sure our employees can get the vaccine.”

The life-sciences industry in Massachusetts is huge — at least 80,000 people work in biopharma alone. But there’s still some debate in the industry over which kinds of workers would be eligible in Phase 2, depending on how the state’s definition is interpreted.

David Hamer, professor of global health at Boston University, said he understands the rationale behind including medical suppliers in the second phase. They do, after all, make lifesaving products that hospitals need. But he said they should be able to continue their operations in ways that minimize putting workers at risk of infection.

“I think they could be immunized at the same time as the general public,” Hamer said.

Once Phase 3 arrives, distribution could open up to many more companies. Several traditional big office employers have been preparing to offer vaccines to workers in Phase 3, or at least considering it.

For example, a Fidelity Investments spokesman said executives there want the company to help with vaccine distribution in part by inoculating its employees, and a spokesman for Blue Cross Blue Shield of Massachusetts said the insurer plans to seek state approval to distribute shots to employees at one of its South Shore offices.

Marylou Sudders, Baker’s health and human services secretary, has been meeting with business groups to discuss vaccine rollout logistics. Next up: a virtual visit with the Massachusetts High Technology Council on Thursday.

“There’s a high degree of interest in how a company can set up and get certified to vaccinate their employees,” said Chris Anderson, the tech council’s president.

Universities are also getting in on the act, starting with health care workers. Richard Doherty, president of the Association of Independent Colleges and Universities in Massachusetts, said more than 20 schools are already vaccinating eligible employees directly, primarily through their health clinics. He noted sanitation and food-service workers are scheduled to become eligible later in Phase 2.

Jim Rooney, chief executive of the Greater Boston Chamber of Commerce, said he doesn’t expect overwhelming demand from member companies, in part because of the complicated protocols and because many workers should be able to get vaccinated from a community site before they need to return to the office.

“I don’t know if it’s going to be a massive addition to the vaccine numbers,” Rooney said of employer-hosted sites, “but it’s an opportunity for the business community to step up.”