Is Invitae a Buy? | The Motley Fool

Invitae (NYSE:NVTA) has become a favorite of ARK Investment Management, a famous Tesla bull in the electric vehicle manufacturer’s early days. In fact, the investment firm’s CEO, Cathie Wood, has called Invitae one of her most underappreciated holdings.

ARK Invest owns 27 million shares of Invitae. That is worth about $1.12 billion, which is huge, considering the company only has a market cap of $7.74 billion. Over the past 12 months, the company’s stock has already tripled investors’ money. Should you give its shares a try? 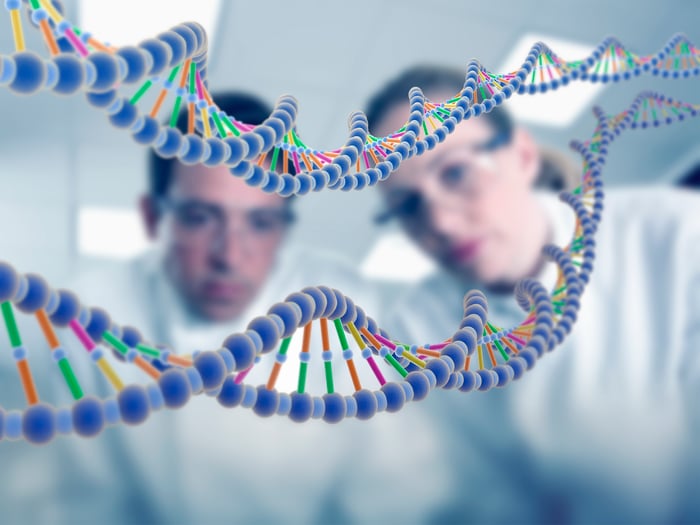 What’s so special about Invitae?

Invitae’s gene testing technology analyzes health data after screening patients’ samples (such as blood, saliva, etc.). Its diagnostic tests can detect heart disease, neurological disorders, hereditary cancers, pediatric illnesses, and other rare conditions. It also offers proactive tests that screen for cancer, cardiovascular issues, and genetic disease risks. An estimated 15% of all adults in the U.S. are prone to this category of illness.

Finally, Invitae’s reproductive health tests can detect pregnancy complications and genetic abnormalities within a fetus. The technology itself has far-reaching applications beyond what has been mentioned above, including personalized gene therapies for hereditary illnesses. The total addressable market for genetic testing is about $154 billion worldwide.

The company partners with biopharma companies, hospitals, medical centers, insurers, and patients to provide the tests. Its revenue is largely recurring, and it has an additional opportunity to scale its business abroad, as only 13% of its sales come from outside the country.

Last year, the company’s sales increased by 29% year over year to $279.6 million. Its number of billable tests increased by 41% over 2019 to 659,000. However, both metrics fell short of their goals — $330 million in revenue and 725,000 billable tests, respectively — as the COVID-19 pandemic forced many patients to defer discretionary medical expenses. The company’s net loss also accelerated from $242 million in 2019 to $608.8 million in 2020, due to greater research spending and about $120 million in acquisition expenses related to the acquisition of ArcherDx. This subsidiary develops assays for mutations and gene fusions.

Is the growth sustainable?

Right now, Invitae is one of the first clinical gene testing firms on the market. It has a vast collection of tests available and offers a genetic counselor that helps customers interpret their results. The downside is that it has no differing scientific qualities from competitors, such as a greater genome database to compare samples. In addition, its tests are also expensive, costing an average of $413 apiece.

This year, the company expects to grow its sales sharply to $450 million. It is no doubt receiving a significant tailwind as patients who deferred elective medical procedures, exams, and tests are coming back. Another reason to be optimistic is Invitae’s commitment to research and development; management allocated a stunning 86% of its revenue last year to advance its testing capabilities.

Paying 19 times revenue for this stock is a bit pricy for its growth rate of 61% this year. Fortunately, Invitae is reinvesting nearly every penny it earns into its future, so it should keep up its momentum in the next few years. Investors seem satisfied paying up for its growth model, too. Back in January, the company closed a stock offering that infused it with $434 million in cash to make up for its losses. For these reasons, Invitae is a decent biotech stock to buy, but it’s best to start small.

This article represents the opinion of the writer, who may disagree with the “official” recommendation position of a Motley Fool premium advisory service. We’re motley! Questioning an investing thesis — even one of our own — helps us all think critically about investing and make decisions that help us become smarter, happier, and richer.