Vaccinations and warmer weather should help limit COVID-19’s spread as the state moves toward further loosening restrictions, but the virus will continue to kill and make people sick for years to come, public health experts predict.

“The pathogen is very likely to be with us in perpetuity and we have to learn to live with COVID,” said Dr. K.C. Rondello, an epidemiologist at Adelphi University in Garden City.

Experts envision a future free of capacity, mask and social-distancing restrictions. When that occurs will depend on vaccinations and other factors. Meanwhile, there’s a continued risk for those who remain unvaccinated, as New York State looks to fully reopen.

New York State on Wednesday will lift capacity restrictions on most venues and relax other rules.

Some public-health experts worry the move risks a spike in infections, while others say vaccinations and warmer weather should limit the coronavirus’ spread.

Experts don’t expect the virus to be eradicated, and they foresee continued clusters of COVID-19 cases among the unvaccinated for years to come.

The state on Wednesday will take its biggest step yet toward normalcy, as capacity limits for most venues are set to be lifted. Restaurants, houses of worship, gyms, stores, hair salons and other venues can be at 100% occupancy, if there is 6-foot social distancing. Maximum capacity for big gatherings will rise, and full capacity at large venues — including Yankee Stadium and Citi Field — will be allowed in sections for vaccinated people, with unvaccinated people socially distanced from one other.

Health experts disagree on whether the lifting of restrictions by Gov. Andrew M. Cuomo is wise.

“The fact you’re relaxing restrictions and enabling people to be close together not wearing a mask at least some or all of the time is a very dangerous situation,” said Dr. Stanley H. Weiss, an epidemiologist and professor at the Rutgers New Jersey Medical School and the Rutgers School of Public Health, referring to how patrons in places such as restaurants and bars regularly remove their masks. “And it’s premature to do that when we know a significant proportion of the people coming in to those establishments is not fully vaccinated.”

State health department spokesman Jeffrey Hammond said Cuomo’s decision to further ease restrictions was based on “the significant progress in vaccinations and a sustained reduction in COVID-19 cases and hospitalizations throughout New York State,” a trend that’s expected to continue.

The Centers for Disease Control and Prevention on Thursday said fully vaccinated people no longer need to wear masks in most situations, and Cuomo later that day said he and Health Commissioner Dr. Howard Zucker would consult with health experts to decide whether to change New York’s mask rules.

Rondello said the degree of reopening on Wednesday strikes an appropriate balance, because some restrictions remain and warmer weather means people will spend more time outdoors, where virus transmission is lower. Vaccinations — 8.23 million New Yorkers, or 41.3% of the state’s population, were fully vaccinated as of Saturday morning — already have helped push down new infections and will continue to do so, he said.

“For every percent vaccine coverage goes up, infections, hospitalizations and deaths go down,” he said.

Rondello cautioned, though, that the state should reimpose restrictions if case numbers rise significantly.

Doctor worried about another round of infections

Weiss said “the emphasis on distancing is an erroneous emphasis,” because, even though social distancing helps, the virus can spread through the air and infect people more than 6 feet away. In addition, few businesses have adequately overhauled indoor ventilation systems. He worries that the relaxation of restrictions will lead to “another potential round of infections that will be difficult to control.”

Even vaccinated people — particularly those who are older and with health conditions — should be cautious because, although the relatively small number of vaccinated people who have gotten sick from COVID-19 typically get only mildly ill, some have died or have been hospitalized, Weiss said.

Sean Clouston, an epidemiologist and associate professor of public health at Stony Brook University, said that as restrictions loosen, the increase in vaccinations will help protect the unvaccinated. If two unvaccinated people sit in a restaurant near three tables of fully vaccinated people, “From a COVID standpoint, it’s like those other three tables are empty. You’re protected as if they were empty.”

Early research indicates a vaccinated person is significantly less likely to transmit the virus to others than an unvaccinated person, although findings are not yet conclusive.

Clouston said that “the most dangerous activity now is if people who are unvaccinated hang out together … What happens is COVID slowly will migrate from one of those [unvaccinated] bubbles and figure out a way to get to another bubble and then spread through that bubble.”

Eventually, policymakers will have to balance the potential for infection and death that remains for the unvaccinated with the desire to allow even the riskiest scenarios, such as crowded bars and full-capacity indoor concerts and sports events, he said.

“At some point, we’re going to have to say it’s their choice” not to get vaccinated, and open the economy up more widely, knowing that it puts unvaccinated people at more risk — although a complication is that young children currently can’t get vaccinated, and the vaccine is not effective in some people with compromised immune systems, he said.

Children as young as 12 became eligible for the Pfizer-BioNTech vaccine on Wednesday. Clinical trials are ongoing for children 6 months to 11 years old.

Clouston said it’s not necessary to reach herd immunity — which most experts put at 70% to 90% of the population — to greatly reduce the spread of the virus.

“If we hit something close to but below herd immunity, what I anticipate is we’ll see kind of like what we saw last summer: There will be regular numbers of people with COVID, some people will be in the hospital with it and some people will die, but mostly it will be a small number of people” in the winter, with even lower numbers during the summer.

Dr. David Battinelli, chief medical officer at Northwell Health, believes herd immunity, which he says likely will require a 90% vaccination rate, is unlikely without widespread vaccination mandates, such as those already in place or planned for universities, sports venues and other locations — some of which also accept a recent negative coronavirus test result.

“You’re going to need to be vaccinated or you’ll have to be tested every single time you go somewhere, and people are going to be, ‘This is ridiculous. Why can’t I just get vaccinated instead of getting tested?’ It has to be inconvenient for the people who simply don’t want to do it,” he said.

Vaccine hesitancy also will be reduced as people see their family members, friends and neighbors get vaccinated, he said. 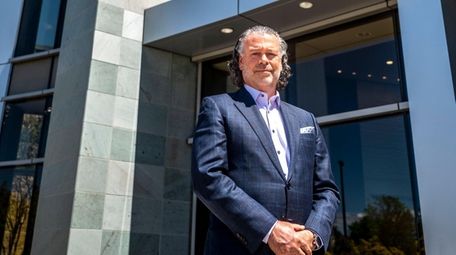 Rondello said a return to a new normal depends not only on vaccinations — the risk of infection will be higher where fewer people are vaccinated — but also on consistently low case numbers, whether variants develop that are resistant to vaccines and on careful surveillance of the virus’ spread.

“The idea is we’ll hopefully get to the point where case volume is low enough, aggressive testing and early identification of new transmissions is quick enough, that you can react and stifle a smoldering situation before it erupts into a full-blown fire,” he said.

That’s the best scenario for a virus that likely will not be eradicated completely, he said.

“We’re not going to be living this way forever,” he said.

David Olson covers health care. He has worked at Newsday since 2015 and previously covered immigration, multicultural issues and religion at The Press-Enterprise in Southern California.