Mary Katherine Melroy, 40, was relieved when a mammogram in November of 2020 determined that the lump she found in her breast wasn’t a cause for concern. What was concerning, however, was her risk assessment score for developing breast cancer.

She was referred to the High-Risk Breast Evaluation Clinic at MUSC Hollings Cancer Center, where she met with a genetic counselor and completed testing to search for clues that may have put her at a greater risk of developing an inherited form of breast cancer. That’s when she learned she had a pathogenic mutation in the CHEK2 gene and a 25% to 39% chance of developing breast cancer in her lifetime – more than double the risk of the average U.S. woman. The mutation also increases her risk of developing colon and thyroid cancer.

Instead of panicking, Melroy was comforted by the news. It gave her the answers she’d been searching for when her mom was diagnosed with breast cancer 10 years ago at the age of 58.

“It was actually a relief because it made sense,” said Melroy, who never understood how breast cancer could affect someone as petite, healthy and fit as her mom. “It didn’t give me anxiety to know I had this mutation. It put the ball in my court to do what I need to do.”

Melroy got to work researching her mutation and learned that opting to have a bilateral mastectomy – a surgery used to remove both breasts – could reduce her risk of breast cancer to 5%. After watching her mom struggle with the side effects of chemotherapy, she decided she wanted to do everything in her power to reduce her risk of going through the same thing. She plans to get the surgery toward the end of 2021.

Knowing she’s at increased risk of cancer is empowering for Melroy, as she feels like she has options for shaping her future.

“As an adult, there are very few things that I feel like I can control, but this is a piece of the puzzle of my health that I can take control of. I’d rather get the surgery than go in for screenings twice a year because I’d feel like we were just waiting until we found something,” said Melroy, who also plans to talk with her doctor about getting screened early for colon cancer.

“There’s so much you can do when you have the knowledge. A lot of people are scared at the thought of getting genetic testing, but what’s scary to me is looking at what happened to my mom.”

At Hollings, the demand for genetic testing has risen 422% in the last year. In response, the genetic counseling program is the largest it has ever been, employing six counselors total, two of whom provide full-time onsite services for Hollings patients.

While genetic testing’s popularity took off in 2013 following a Supreme Court case that allowed more than one company to test for certain genetic mutations, it continues to become more common as testing guidelines expand to include more people. It’s now recommended that all pancreatic, ovarian and high-risk prostate cancer patients be referred for testing, and talks of including all breast cancer patients are in the works. 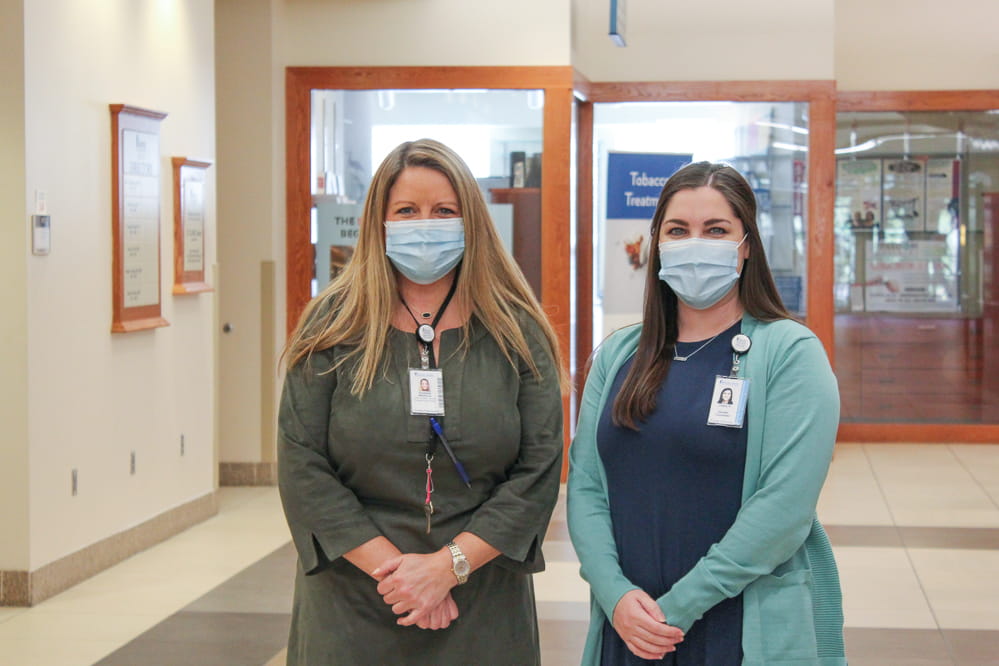 According to Libby Malphrus, one of Hollings’ onsite counselors, the ability of Hollings’ program to grow with the demand is one thing that makes it unique.

“There’s a shortage of genetic counselors nationally. The access people have to genetic counselors at Hollings is huge and something most large health care systems strive for,” said Malphrus. “We have a multitude of counselors and various ways in which we can deliver that service, including through telemedicine, and that’s a huge asset.”

Because the program is still growing, genetic counseling currently is only available to current cancer patients or those deemed at high risk of developing cancer based on their family history. For patients who already have cancer, genetic testing can help to inform their treatment plans, from determining which surgical techniques should be used to how aggressively the cancer should be treated.

It can also determine whether they’re at risk of developing other cancer types and whether their family members may need increased surveillance.

While the information found can potentially be lifesaving for cancer patients and their families, Charly Harris, the program’s other full-time genetic counselor, reminds patients that testing also comes with risks.

“When someone is diagnosed with cancer, they don’t want to think about whether there are other cancer types for which they may be at risk. Their diagnosis is often already a big surprise for them, so adding additional cancer risks can be too much information in that moment,” said Harris, who noted Hollings’ counselors meet with patients prior to testing to discuss the pros and cons.

Malphrus added, “It’s hard enough for individuals to battle their diagnoses and watch the emotional impact that has on their families without the thought that they could be passing that gene on to their children. That’s heavy information, which is why we don’t want anyone to assume they should be tested just because they have cancer.”

Melroy understands the information found through her testing affects not only her own health but the health of her sisters, brother and children. She’s already planning on having her 6-year-old daughter tested when she’s old enough.

While the technology used in genetic testing continues to grow in speed and efficiency, Malphrus and Harris acknowledge there’s still a lot that is unknown about how to use the results. Finding a mutation by testing more genes isn’t helpful if counselors don’t know what that mutation means.

That’s why it’s important for patients to have testing done through a genetic counselor who is trained in medical genetic testing as opposed to companies offering direct-to-consumer DNA testing. Direct-to-consumer tests only examine a small number of genes, giving an incomplete picture of potential health risks. The test at Hollings examines up to 84 genes that are known to be associated with an increased cancer risk.

While certain cancers, like breast and ovarian, are more strongly associated with hereditary factors than others, most cancers are not inherited. In fact, only 5% to 10% of breast cancers and 20% to 25% of ovarian cancers are hereditary, which is why getting regular cancer screenings is important regardless of genetic testing results.

“People often think, ‘I don’t have a family history, so it’s not going to happen to me,’” said Harris. “I always remind my patients that they still have the general population risk of all cancers. Just because we’ve lowered the risk for hereditary cancers doesn’t mean they don’t need to continue getting screened.”

Individuals can lower their cancer risks through lifestyle choices such as maintaining a healthy weight and diet, getting regular exercise, avoiding smoking and staying on top of their preventive care. Additionally, getting the HPV vaccine can protect against six types of cancers.

While Harris and Malphrus both entered genetic counseling due to their love of the science, they agree that the most rewarding part of their job is giving patients a sense of control over something they often feel they can’t change.

“Genetics is complicated, and it’s only becoming more complex,” said Malphrus. “It’s rewarding to be that bridge between science and medicine and to help people to make educated choices that are best for themselves and their families.”