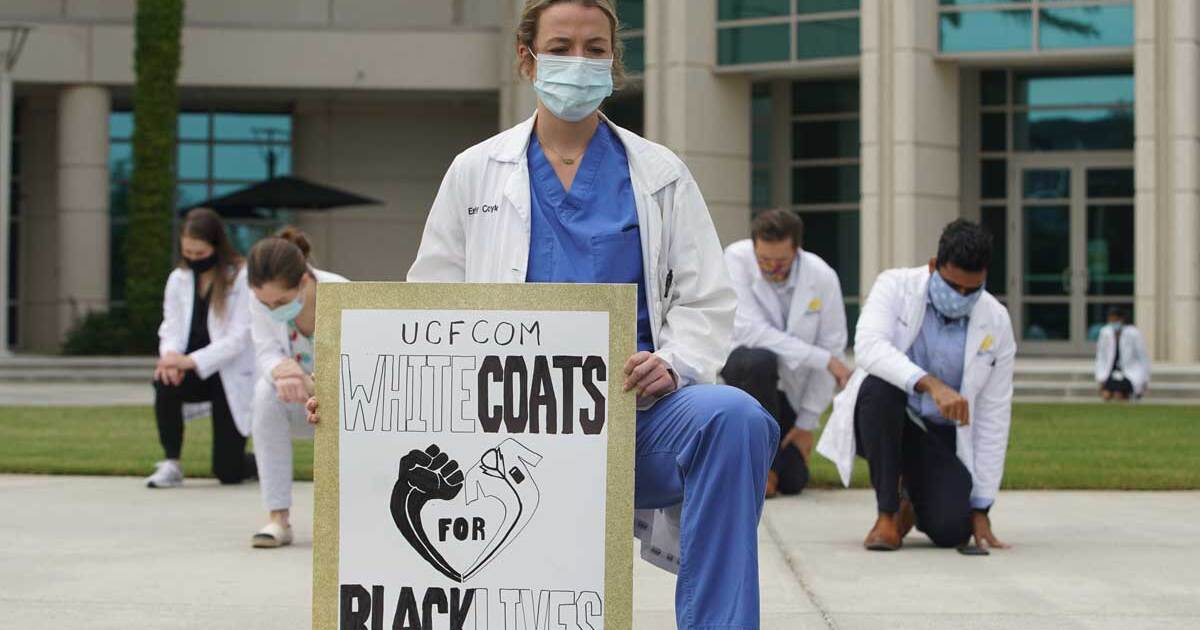 Inam Sakinah and her classmates will forever be known as the students who started medical school during the 2020 covid-19 pandemic.

All of them had prepared for this step for years, taking hours of hard science classes in college, studying for the medical school admissions test and often volunteering, working or even getting master’s or other advanced degrees before starting on the long path to earning a medical degree.

But their decisions to become doctors seemed to carry even more weight when set against the backdrop of the events of 2020.

“People were needlessly dying while our leaders were failing,” said Sakinah, a first-year student at Harvard Medical School. “We also saw the crushing inequities the virus laid bare. That was the context in which we were beginning our journey into medicine.” Covid has killed more than 550,000 Americans and disproportionately affected people of color.

And there were other concerns, too. Issues of racial justice came to a head in the wake of George Floyd’s death in May in Minneapolis, while matters of science and public health were subject to debate on the presidential campaign trail.

To many, getting involved in politics quickly became as much a professional responsibility as studying human anatomy or shadowing residents on clinical rounds. Sakinah, for instance, is part of a group of medical students who channeled these concerns into forming a nonpartisan student organization, Future Doctors in Politics.

The organization, which launched in February, aims to educate medical students on the political process and show them how they can get involved in shaping policy, and perhaps even run for public office one day. At the core of these efforts is the idea that doctors will push for policies centered on patients, not insurers or hospitals. Bottom line: It’s a way to voice their frustration with health care in America.

The Changing Political Face of Medicine

Over the years, medical students have turned to a variety of organizations as an outlet for their political and professional concerns.

The American Medical Student Association has been politically active since it separated from the American Medical Association in 1967 and took on its current name a few years later. Since its early days, the organization has focused on health equity for people of color and, more recently, the LGBTQ community and for universal health care. Other student groups advocate for single issues, such as Students for a National Health Program, which lobbies for a government-run single-payer system, and Medical Students for Choice, which promotes reproductive rights.

Medical students also engage in nonpolitical work that can be seen as advocacy, such as volunteering at free clinics where patients might be uninsured or have substance use disorders, said Jonathan Kusner, a fifth-year medical student at Harvard.

Kusner helped lead a new nonpartisan AMSA effort in 2020, “MedOutTheVote,” which asked medical students and providers to register to vote and then volunteer to assist others in registering. The initiative involved students at more than 80 medical schools and helped facilitate more than 13,000 registrations.

The MedOutTheVote initiative illustrates the change medical school professors and experts said they’ve noticed among students regarding their engagement with current events and awareness of how as doctors they might shape policy by wielding their medical expertise.

Dr. Neel Shah, an assistant professor of obstetrics, gynecology and reproductive biology at Harvard, said he thinks medical students have always been interested in politics. But today’s pitched political environment makes them more inclined to speak out. “There is a greater degree of willingness to be critical of existing policies and norms, coming from students at a larger volume,” said Shah.

“I really think that medical students have realized increasingly if they want to create healthier patients, their responsibility reaches beyond the patient in front of them,” said Moriates. “As students are recognizing the systemic nature and the social determinants of health, they realize you have to treat the system around you as well and learn how to advocate for changes.”

While Future Doctors in Politics isn’t officially aligned with a political party, it promotes values and a mission that are typically associated with Democrats or progressives, such as health care as a human right and racial inequity as a pressing health issue.

And it flows from the formation of the medical student organization White Coats for Black Lives, which took shape in 2015 after the deaths of Michael Brown and Eric Garner. The group’s goal is to dismantle racism within the medical system and help students prepare to be racial justice advocates.

The growth of these organizations may also reflect medicine’s increasing leftward tilt. Recent studies and surveys indicate more doctors identify as Democrats than Republicans, possibly in part because medical schools are admitting more women and people of color. In addition, fewer physicians now own their own practices. As small-business owners, they may have tended to lean Republican.

A widely cited 2014 study found that the percentage of doctors contributing to Republican political candidates decreased from 1991 to 2012, though certain higher-earning specialties were more likely to give to Republicans than to Democrats. A 2019 study focusing on ideology rather than party affiliation found that almost half of first-year medical students identified as liberal, while 33% identified as moderate and 19% as conservative.

Medicine Is Polarized, Too

As the rest of society deals with the growing divisions between those on the ideological left and right, so does medicine — just look at the difference in attitude about covid vaccines between Democrats and Republicans. Medical students are not immune from these pressures. And some conservative students and professors said they often don’t feel comfortable expressing their views.

“Students are afraid. Campuses are more liberal — meaning they don’t necessarily believe in less government,” said Rebecca Kiessling, director of programs and chapter development at the Benjamin Rush Institute, which teaches medical students about free-market health care options and opposes government regulation. The institute has chapters at 55 out of the 192 medical and osteopathic medical schools in the U.S.

“It is often difficult at certain schools to even get the student body or administration to agree to have a Benjamin Rush chapter, because they don’t believe in what we do,” said Kiessling.

Others whose politics differ from the current progressive tilt echoed this experience. Dr. Brian Miller, an assistant professor of medicine at Johns Hopkins University who is a conservative health policy expert, said the key is not losing perspective.

“Politics is increasingly polarized and medicine is no exception,” Miller wrote in an email. “The challenge for us is to remain focused on our primary goal of growing future clinicians and treating patients while providing a supportive environment for people of all perspectives and walks of life.”

To Dr. Lawrence Deyton, senior associate dean for clinical public health and professor of medicine at George Washington University, it’s all part of the changing attitudes of what medical students feel their job responsibilities should encompass. He thinks the trend toward activism will continue.

“It’s not enough to be great at the bedside or at the clinic,” said Deyton. “When it comes to public health issues, the covid crisis, racial issues, there is a role of the clinician to speak up. Our society wants to hear from us. Some people call this a political role.”

KHN (Kaiser Health News) is a national newsroom that produces in-depth journalism about health issues. Together with Policy Analysis and Polling, KHN is one of the three major operating programs at KFF (Kaiser Family Foundation). KFF is an endowed nonprofit organization providing information on health issues to the nation.