Delta, health insurers are making the unvaccinated pay for their choice. 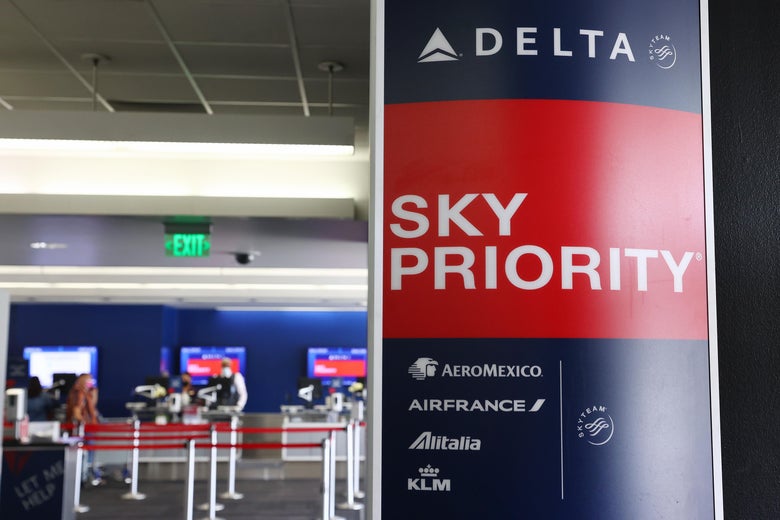 Refusing to get vaccinated against COVID-19 was already a reckless health decision. Lately, it’s been turning into an expensive one, too.

Take the price of insurance. On Wednesday, Delta Airlines announced that it would charge unvaccinated employees an extra $200 per month for their health coverage and require that they be tested for the coronavirus weekly. At least part of the airline’s motivation was financial. Like many major corporations, the airline is self-insured, meaning that it pays the medical claims of its own workers, and in an open memo to staff, CEO Ed Bastian noted that the average hospital stay for COVID had cost it $50,000. While 75 percent of its workforce is vaccinated, Delta wants to push the number higher.

It wouldn’t be surprising if other big companies followed suit. A number of employers, from hospital networks to Disney, have decided to simply require that their workers get vaccinated or submit to testing. But for various reasons, others worry that mandates will seem too overbearing—Delta, for instance, might be concerned about blowback from Republican politicians in its home state of Georgia—and may prefer to prod their employees with insurance surcharges. One corporate consultant told the New York Times that about 50 companies had spoken with him about imposing these sorts of penalties.

There are probably limits on how much companies can increase premiums for the unvaccinated. Under the Health Insurance Portability and Accountability Act—better known as HIPAA—employers generally are not allowed to charge workers extra for insurance based on their health status (the rule is somewhat similar to the Affordable Care Act’s regulations for the individual market). But federal law makes an exception for employer wellness programs, which can offer workers financial rewards or penalties to take steps such as quitting smoking. Vaccine surcharges would probably have to be structured under the same rules, which means the punishments for going without a shot can’t be so stiff that they can be considered “coercive”—a slightly fuzzy standard—and are limited to no more than 30 percent of the cost of individual coverage under the company’s plan. Delta seems to be keeping all of this in mind, though all their spokesman would tell me when I asked about it was that the company “is well within the plan and legal parameters to make this change.”

Simply mandating vaccines for employees might be the more straightforward and superior strategy as far as public health is concerned, compared to using the wellness program model. After all, there’s no question that businesses can outright require workers to get vaccinated before they return to the workplace (which, ironically, is a vastly more “coercive” option than any premium increase). And some hardline anti-vaxxers might choose to simply go without the shot or coverage, which could further isolate them from mainstream medical advice.

“I’m not sure that pricing someone out of their insurance by charging them more is a good strategy for getting them vaccinated,” Sabrina Corlette, the director of Georgetown University’s Center on Health Insurance Reforms, told me. “Why would we cut people off from their family doctors or pediatricians to convince them to get vaccinated? That seems like biting off your nose to spite your face.”

But companies aren’t necessarily looking for the optimal choice from a public-health standpoint—they’re looking for an option that makes sense to them financially, politically, and from a workforce-management perspective, which might mean using higher premiums as a strong nudge.

Policies at large corporations, meanwhile, aren’t the only way it’s getting pricier to go unjabbed.

Let’s say you get sick. At start of the pandemic, private insurers largely chose to waive out-of-pocket expenses for coronavirus patients who needed hospital care. But most have stopped offering those breaks; a recent Kaiser Family Foundation analysis found that almost three quarters of insurance carriers have brought back cost-sharing, and another 10 percent plan to do so by October. As a result, Americans who land in the ER with COVID might well face a hefty bill. (Unlike with coronavirus testing, federal law doesn’t require free care for people who actually get sick.)

Why are insurers no longer waiving out-of-pocket costs? There’s a confluence of factors. Covering COVID care at no charge was essentially an inexpensive way for carriers to generate good will early in the pandemic, not to mention avoid a federal mandate requiring them to do so, Cynthia Cox, a health care expert at the Kaiser Family Foundation, told me. The Affordable Care Act requires insurance companies to spend 80 percent of the premiums they collect on medical claims; otherwise, they have to refund some of the money to enrollees. When Americans cut back on hospital visits early in the pandemic for anything other than COVID, insurers essentially found themselves earning too much money, and needed to spend it on something in order to meet Obamacare’s rules. Using the money waiving out-of-pocket costs was essentially “a free way to build good PR,” Cox said.

“They weren’t losing anything,” Cox further explained. “But this year, health care use has mostly rebounded, and there’s a vaccine, so hospital costs can mostly be avoided. So there isn’t as much sympathy, I think, for people who are hospitalized with COVID.”

How much can COVID patients expect to pay for a trip to the hospital? Cox told me that her think tank hadn’t found good real-time data yet, but that they had looked at the charges faced by pneumonia patients in past years, which averaged out to around $1,300 to $1,464 depending on complications, similar to the deductibles on many health plans. People with a higher deductible or out-of-pocket maximum could pay more—especially if they wind up in the intensive care unit or need a ventilator.

One way you could look at all this is that some of the worst aspects of the U.S. health care system are currently being used to reasonably good ends. After all, wellness programs are a major loophole in insurance law that allow companies to discriminate against some of their employees, which is why patient advocates fought hard against writing them into the Affordable Care Act. Likewise, it is generally a bad thing that Americans can face thousands of dollars in charges when they end up in the hospital with an illness.

But right now we’re in an exceptional situation, where a major chunk of the country has made the personally and socially irresponsible decision to not get vaccinated in the midst of a plague. If the threat of a potentially deadly illness won’t convince them, well, hopefully the threat to their bank account will.