After running Sonoma County’s public health laboratory nearly around the clock for months, Rachel Rees has only recently been able to downshift and give her microbiologists some vacation time. They need it: Two are wearing wrist braces for repetitive stress injuries after processing tens of thousands of COVID-19 tests.

But if the pandemic had begun a year from now, this lab might not have even existed.

In January, 2020, Rees’ superiors asked her to begin analyzing whether the lab in Santa Rosa should be shut down to save money. As the first COVID-19 cases appeared in California, that review was halted.

“Public health labs are expensive. I honestly think there was a large chance that we would have been closed,” Rees said, adding with a diplomatic smile, “I feel like we did prove our importance.”

California’s county and city public health departments have been stretched to their breaking point throughout the pandemic.

Even before COVID-19, there was rarely enough money to do what needed to be done to protect people’s health, and the pandemic underscored the risks of so many years of underinvestment, said Michelle Gibbons, executive director of the County Health Executives Association of California.

That’s why many health leaders were shocked and worried when Gov. Gavin Newsom didn’t include a new infusion of cash for public health in last month’s proposed budget, despite the state’s $76 billion surplus. Instead, he included money to study future public health spending.

Many health leaders were shocked when Gov. Gavin Newsom didn’t include a new infusion of cash for public health in last month’s proposed budget.

Now Newsom and state lawmakers are wrangling over how much money to devote to rebuilding California’s public health systems.

Lawmakers have proposed at least $200 million annually in new funding for local health departments and another $100 million for local nonprofits to improve health equity. The legislature’s budget bill earmarks about $5.1 billion for public health, compared to the $4.6 billion that Newsom proposed. When asked last week whether he would support the legislature’s additions, Newsom did not address public health departments and instead touted his unrelated efforts to enhance health care.

Legislators are expected to vote on the bill early next week and continue negotiating with Newsom. The governor must sign the budget by June 30.

The extra money would go toward hiring more public health workers, buying new equipment and modernizing computer systems, many of which are so outdated that lab staffers had to share early COVID-19 test results by fax.

“This has been such a rough year for so many people,” said Kelly Colopy, director of the Long Beach Health and Human Services Department. “If we didn’t have to spend so much time begging for resources and we had capacity to respond (earlier), it would have gone so much better. A real disservice was done to the people of our communities.”

Behind the scenes in public health

Public health’s greatest successes tend to be invisible and hard to measure. Think of food poisoning cases that never materialized because of diligent restaurant inspections, or a syphilis outbreak prevented through rapid contact tracing and case investigation.

Public health agencies register births and deaths, and run clinics to test for and treat syphilis, HIV/AIDS and other sexually transmitted diseases. Some organize nutrition classes for people with diabetes. Others provide home inspections to detect lead paint or asthma triggers. The California Department of Public Health scrutinizes 39 forensic alcohol laboratories to ensure the accuracy of testing for drunk drivers or workers.

Because much of this work happens quietly, out of public view, their budgets have often been an easy target for cost-cutting.

“Who went to a restaurant today and said, ‘thank you, public health’?” Colopy said. “Most people don’t think along those lines.”

“(Budget) cuts mean we have fewer people at health departments doing the work, and certainly we don’t have enough when a crisis hits.”

Funding for public health in California is so fragmented and tied to specific diseases that it’s a struggle to modernize critical lab equipment, maintain computer systems and keep the experienced staff needed to save lives in a pandemic, health officials say.

Eleven local labs in California have closed or merged since 1999 to save money, according to the California Association of Public Health Laboratory Directors.

“So much of public health work is based on relationships and people,” said Adriane Casalotti, chief of government and public affairs for the National Association of County and City Health Officials.

“(Budget) cuts mean we have fewer people at health departments doing the work, and certainly we don’t have enough when a crisis hits.”

Money for local agencies comes from the federal government, the California Department of Public Health and “realignment” dollars, which California started giving to counties in 1991 to take over previously state-run programs, including public health.

Public health funding has been declining or flatlining nationally for decades, and California is no exception. 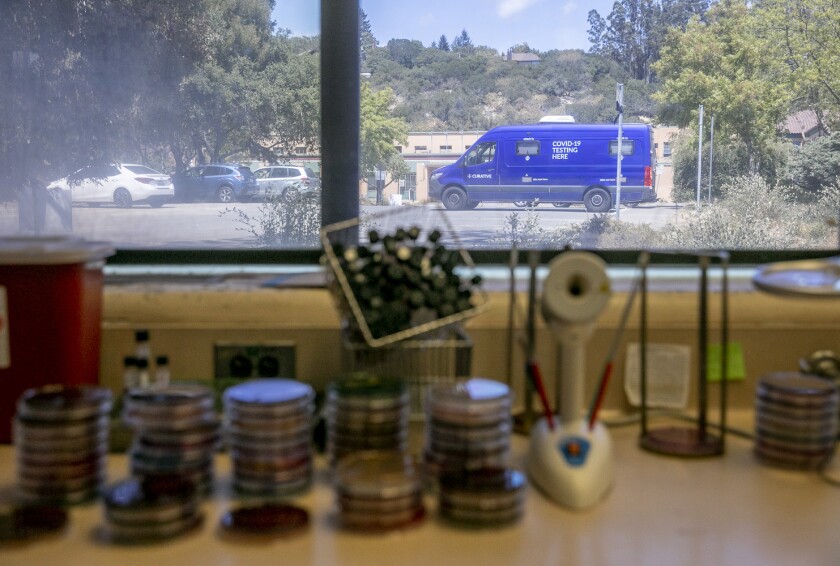 Proficiency testing samples, used by technicians to practice recognition of various pathogens, are stacked up at Sonoma County’s public health lab. In the ongoing struggle for funding, the county had been reviewing whether to shutdown the lab right before COVID-19 hit. Photo by Anne Wernikoff, CalMatters

The state slashed general fund money for public health by 64% between 2007 and 2016 as California recovered from the Great Recession. A boost in federal money meant the total cut was about 11% during that period, according to the Legislative Analyst’s Office.

Spending on public health began rising in California in 2017, with a 19% increase in total funding between 2017 and 2020, according to state budget data. More than $4 billion has flowed to state and local public health agencies since the start of the pandemic, paying for contact tracers, test kits, protective gear and even Sonoma County’s new, $10,000 refrigerator for test samples, which lab staff nicknamed “Big COVID.”

Dr. George Rutherford, an epidemiologist at University of California, San Francisco who served as the state health officer in the mid-1990s, said California’s public health workforce should be expanded. Counties lacking trained health workers are forced to train city librarians and other government employees to work as contact tracers during emergencies, he said.

“You probably need twice as many people as you have,” Rutherford said.

Andrew Noymer, associate professor of population health and disease prevention at University of California, Irvine, said counties need infectious disease specialists “who could step into action during an emergency,” but also add eyes to other diseases during non-crisis times.

Almost everything but COVID put on back burner

Riverside County, like most of the state, has been tracking an uptick in sexually transmitted infections, including chlamydia and syphilis and especially in the county’s desert areas, said public health director Kim Saruwatari.

But her department is only able to respond to cases considered high risk, including those in pregnant women. Saruwatari said the agency receives about 12,000 reports of chlamydia each year, but her staff can only investigate about 10% of them.

That means more outbreaks that could have been prevented. “What’s happening is we’re responding to cases, rather than getting in front of them,” Saruwatari said.

Riverside County has nine communicable disease investigators, about as many as it employed in the late 1980s — even though its population has more than doubled since then.

Saruwatari, who has worked at the department for almost 20 years, has witnessed several programs and positions disappear. Riverside County once had a 25-person health education program that vanished when the economy slumped in 2007. A county program in which 30 nurses taught classes and responded to schools and senior centers also was disbanded during the Great Recession. Some instead filled other positions.

Five years ago, the county also lost state funding for its asthma program, which helped ensure that people were undergoing treatment and could self-manage their condition to reduce asthma attacks. Around that same time, about 15% of all adults in Riverside County had been diagnosed with asthma.

“If we don’t get out of the boom and bust cycle after this pandemic, where, you know, hundreds of thousands of people have died, God help us.”

In spring of 2020, Imperial County was one of the first regions to face a surge in COVID-19 infections and hospitalizations. At one point during the pandemic, the county had 100 people working in epidemiology, thanks to federal and state emergency aid. Before COVID-19, however, just four people staffed the unit.

“That shows you how under-resourced we were,” said Janette Angulo, Imperial’s public health director.

Meanwhile, her preventive care workers morphed into COVID-19 case investigators and contact tracers. Maternal health, nutrition and dental health programs were put on the back burner.

Staff members have just recently started returning to their regular posts, Angulo said, and there’s a lot of catching up to do. 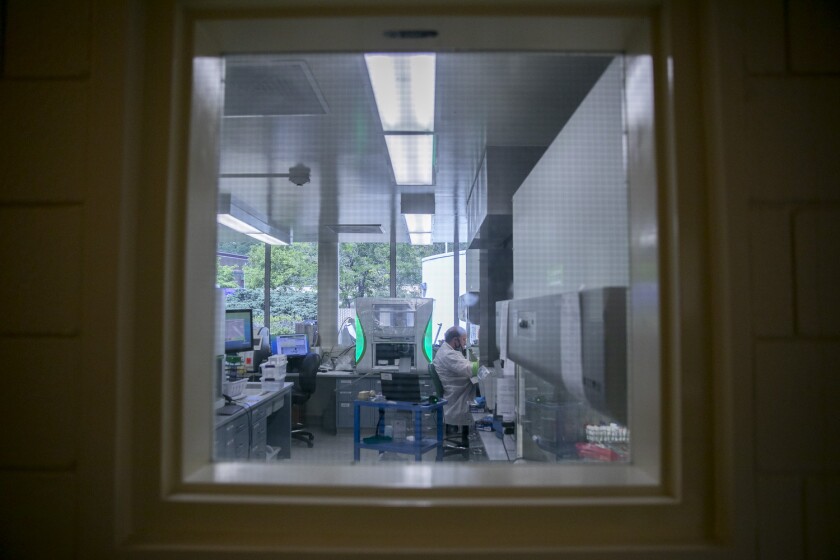 While the consequences of this year-long pause will be seen in months and years to come, it could be especially concerning for Imperial County, which already ranks at the bottom in California when it comes to health behaviors like physical inactivity and smoking, access to care and social and economic factors such as unemployment, education and poverty.

In Long Beach, Colopy said she manages more than 100 separate grants, each requiring reams of paperwork, to keep the city’s public health department afloat. The city used to offer diabetes education classes in five languages, but when its five-year grant ended, so did the classes, even though about 12% of the city’s adults have been diagnosed with the disease.

Public health is expanding, but dollars are not

Some county health officials said they need new teams to address inequities in health care, which have been clearly evident during the pandemic. They’d also like to create public dashboards for other communicable diseases.

Public health’s role also has ballooned to include public safety as well as housing, which affect physical and mental health.

For instance, crowded housing in Madera County was the single most important factor in predicting COVID-19 case rates there. And eating healthier and staying physically active is difficult in neighborhoods where walking and biking is dangerous because of crime and the only shopping options are convenience stores, said Sara Bosse, the county’s public health director.

As the budget negotiations in Sacramento drag on, local health leaders are wondering: Will it take another global pandemic to finally get the money they need?

“If we don’t get out of the boom and bust cycle after this pandemic, where, you know, hundreds of thousands of people have died, God help us,” said Dr. Sara Cody, director of public health for Santa Clara County. “We need…to have a shared understanding that public health is the backbone for community health.”