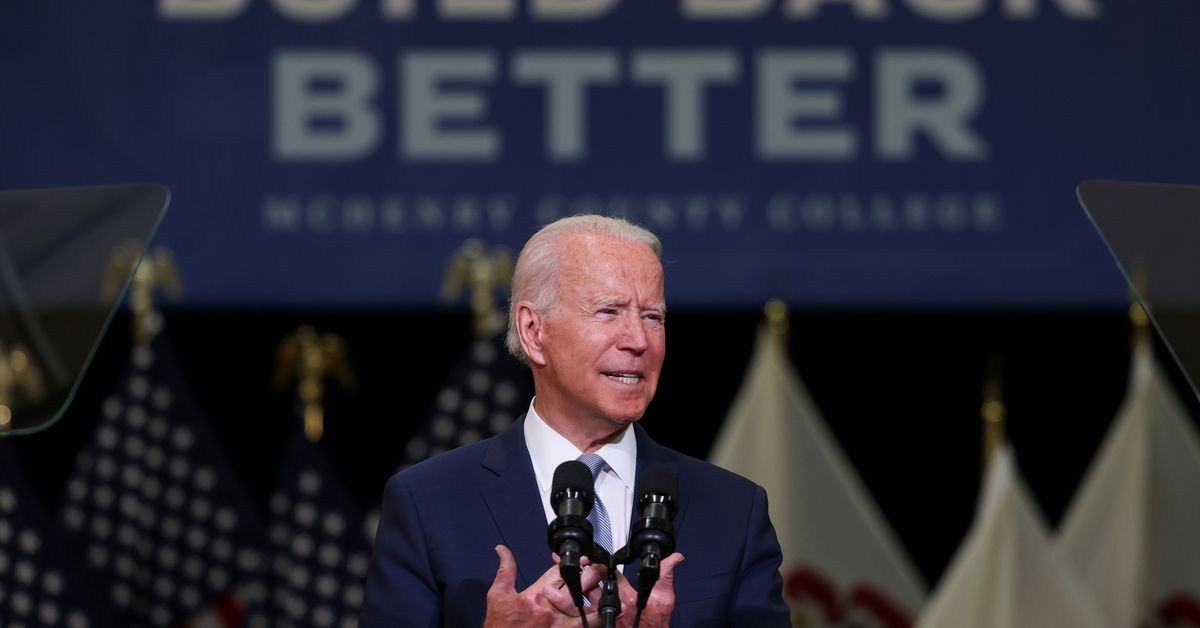 CRYSTAL LAKE, Ill., July 7 (Reuters) – President Joe Biden made the case for spending trillions of dollars on U.S. infrastructure, paid for by higher taxes on corporations, at an Illinois community college on Wednesday, as opposition builds from U.S. business groups.

In a speech Biden focused on what he called “human infrastructure” priorities that did not make it into a $1.2 trillion bipartisan deal struck with Republicans.

The policies include tax rebates for parents, free preschool and community college, healthcare and clean energy subsidies as well as 12 weeks of paid medical leave, financed by raising corporate taxes on U.S. companies.

Biden said a minimum tax of 15% on companies that manage to avoid paying taxes would raise $240 billion and could be used to finance his plans, which he acknowledged are “really expensive”

“The fact is that it is paid for,” he said. “Everybody has to pay their fair share. I’m not trying to gouge anybody. They’ve just got to get in the game,” he said.

The Biden administration’s bedrock economic argument is neither corporations nor wealthy Americans are paying their “fair share” to support research, education, infrastructure and workers in the world’s largest economy.

The International Monetary Fund projects 2021 U.S. growth at 7.0%, one of the strongest recoveries worldwide from the recession induced by the COVID-19 pandemic, if Biden’s plans are enacted.

Speaking at McHenry County College in Crystal Lake, Illinois, near Chicago, Biden said Illinois has 2,374 bridges and more than 6,200 miles of highways in need of repair and that one of every 10 people in the state lacks access to high speed internet.

Democrats hope that most of the proposals not in the bipartisan bill will pass under a budget mechanism that would require only a simple majority in the U.S. Congress, bypassing Republicans, who oppose any new corporate taxes.

Republican Senate leader Mitch McConnell on Tuesday vowed a “hell of a fight for what this country ought to look like in the future” over the tax and spending issue. read more

Biden shrugged off McConnell’s comments and said McConnell had talked about how his home state of Kentucky would benefit from infrastructure spending. “He’s bragging about it in Kentucky,” Biden said.

“We don’t know what’s in that package,” Rachelle Bernstein, chief tax counsel for a retail lobby group, said of the Democrats’ bill. “But we don’t think it is good to use a corporate tax increase to finance spending.”