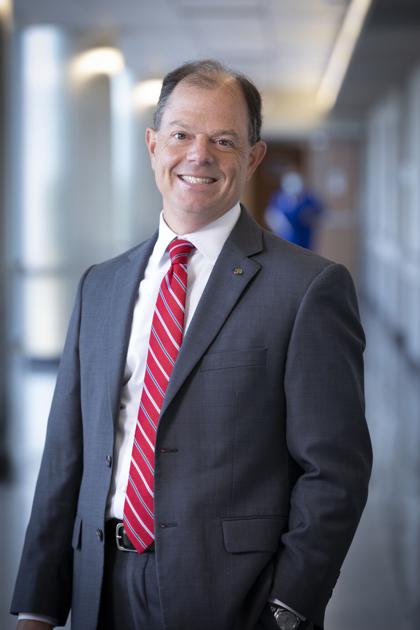 The award recognizes an experienced member who has made significant contributions to the advancement of health care management excellence and the achievement of the recipient’s organization’s goals. Wester is a fellow with the American College of Health Care Executives and past chair of its CEO Council.

Wester has served as president and CEO of Our Lady of the Lake since 2008 and previously president and CEO of St. Francis Medical Center in Monroe. He has been part of the Franciscan Missionaries of Our Lady Health System since 1993, starting as an administrative fellow. The Cincinnati native holds a Masters of Hospital and Health Administration from Xavier University in Cincinnati, bachelor’s degree in chemistry and bachelor’s degree in classical humanities from St. Louis University.

Michele Forbes, who retired as LSU Law Registrar and director of student academic services on Sept. 30 after 36 years of service to LSU and the Paul M. Hebert Law Center, has been honored by LSU with the title of director emeritus.

Forbes was cited an integral part of the LSU Law leadership team for more than 20 years, spearheading much of the innovation that has improved admissions and student services. LSU reserves the emeritus rank for employees who have served in their positions for at least 10 years at retirement and have “made outstanding contributions to the university in either the field of scholarship or public service.” Forbes also recently received the Distinguished Service Award from the Southern Association of Collegiate Registrars and Admissions Officers for her career of service in the admissions and records profession.

Louisiana Appleseed, a nonprofit that recruits professionals to donate pro bono time to solve problems and advance social justice, has presented Good Apple awards to Tonya Rhodes Jupiter for Access to Justice; Margaret Viator for Access to Opportunity; and community awards to Michael Hecht of GNO Inc. and a team from Campaign for Equity New Orleans.

Viator, with the help of interns and project partner Southeast Louisiana Legal Services, curated the 2020 disaster manual contents, expanding access to wealth, such as home and job preservation, in the face of disasters and emergencies.

Hecht’s organization tracked and encouraged businesses in the New Orleans area during the COVID-19 pandemic, connecting businesses to markets and to each other.

Anderson, who started in the dairy industry and transitioned to beef cattle, raises cattle horses, hay and timber in East and West Feliciana parishes. He served as Louisiana state president of Farm Bureau for 31 years and helped grow the organization from 67,000 members to nearly 150,000.

Gay farms more than 4,500 acres in Iberville Parish. His family has been involved in sugar cane for seven generations. Gay is a practitioner of on-farm research at St. Louis Planting Co., the family farm, and has worked in fertility, drainage, erosion control, weed management and sugar-cane variety trials.

Loewer has been an advocate for the rice industry in state and national organizations, and played a significant role in the development of several national farm bills. Loewer played an integral role with the Louisiana Rice Research Board, serving for 26 years, including 12 years as chairman. His advocacy for the rice checkoff program has helped fund the organization’s efforts.