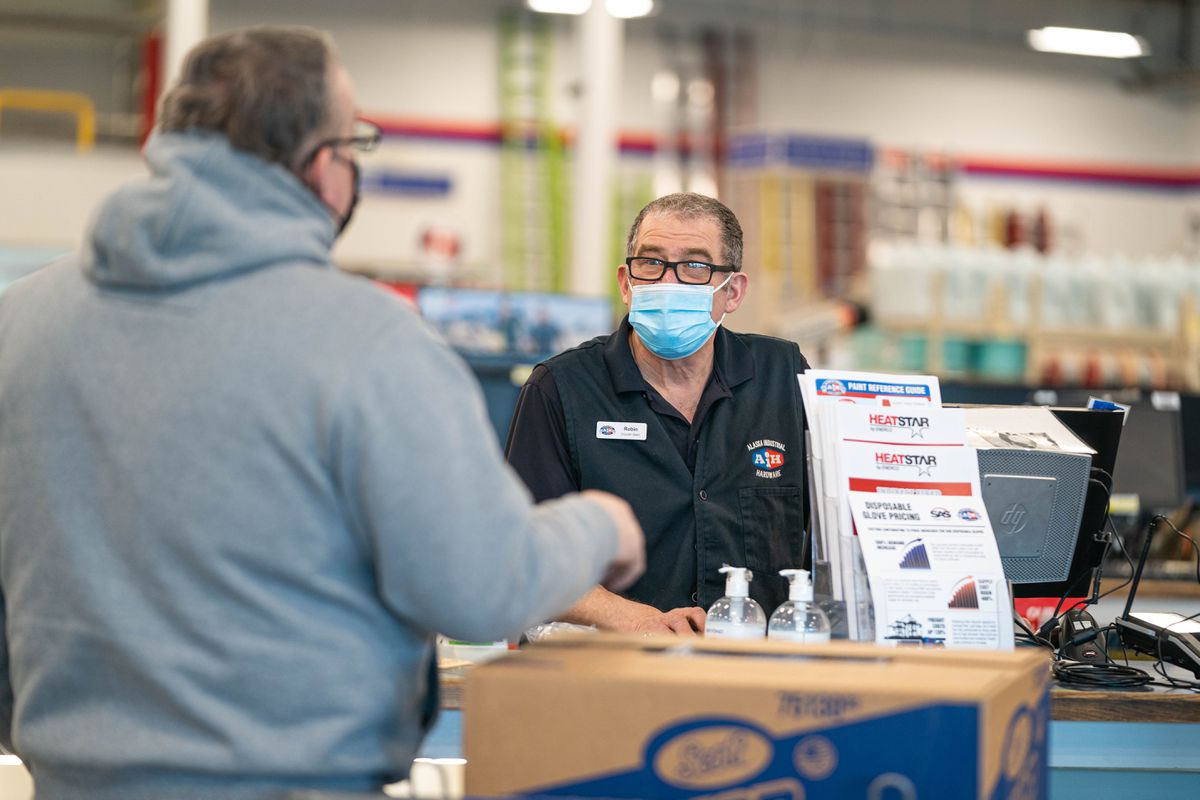 The calls for a boycott started as soon as word got out last month that Alaska Industrial Hardware was requiring workers get vaccinated for COVID-19.

The business is a fully owned subsidiary of Bering Straits Native Corp., where the board of directors in mid-March voted to mandate vaccinate for all employees unless they are approved for medical or religious exemptions.

AIH employs 200 people in eight locations across the state — four in Anchorage and Eagle River — that sell everything from work gloves and Xtratuf boots to air compressors and power tools.

As an essential business, the stores stayed open throughout the pandemic, AIH president and CEO Terry Shurtleff said. Workers are exposed to thousands of people.

Originally, all employees were required to get vaccinated by August, but the board recently lifted that deadline. Now it’s whenever vaccine is widely available around the United States.

“Frankly, this policy is a matter of safety for our people, for their families, for our customers and the communities that we serve,” Shurtleff said. “If they choose not to shop with us because we’ve implemented this policy, we respect that.”

It’s not clear how many other Alaska companies are requiring employees get vaccinated before coming back to work.

But around the state, businesses are having intricate, legally complicated conversations about COVID-19 vaccines, whether to require them — even whether to mention them at all.

Nationally, barely more than 1 in 5 small-business owners said they would require their employees to get vaccines when they become available, according to a CNBC/SurveyMonkey survey in February. Twice as many, or 42%, said they didn’t plan to mandate vaccinations.

A quick survey of her fellow HR professionals around the state, who work at smaller companies, revealed most of the businesses they work for aren’t requiring vaccines.

But that decision depends on many factors including organizational culture and the nature of the business itself, Kjera said. “Are they essential workers? Are they in health care?”

Most of her colleagues aren’t even comfortable asking employees if they’ve been vaccinated, she said. “We have to be so careful, and rightfully so, not to discriminate against people for whatever reason, that they may not be able to get a vaccine and we want to be able to support that.”

It is legal for at least some employers to require vaccines before employees come back to work, according to a December report from the Society for Human Resource Managment that quotes Robin Samuel, a Los Angeles attorney with Baker McKenzie, a global firm that practices employment law.

That’s only “‘if the failure to be vaccinated constitutes a direct threat to other employees in the workplace because the virus is rampant and easily transmitted in the workplace,’” the report says, quoting Samuel.

“Exceptions must be made for employees who cannot be vaccinated because of disabilities or due to sincerely held religious beliefs,” Samuel said. “Employers do not have to accommodate secular or medical beliefs about vaccines.”

There are rewards for vaccination, in different forms.

In Anchorage, municipal officials updated the city’s face covering requirement when they announced in late March that fully vaccinated employees in workplaces who are separated from the public and unvaccinated coworkers no longer need to wear masks.

Some companies are offering incentives for vaccine like days off, or at least paid time off to get the shot.

The Families First Coronavirus Response Act also requires some employers, such as government or larger businesses, provide paid sick leave up to 80 hours for any vaccine side effects. AIH falls under that category, according to Bering Straits Native Corp. spokeswoman Miriam Aarons.

Some offer money, a concept that raises ethical concerns for one University of Washington researcher.

Nancy Jecker, a bioethicist at the UW School of Medicine, argues in an analysis this month in the Journal of Medical Ethics that such “undue inducement” could violate a worker’s autonomy and potentially prove the most coercive for the most economically disadvantaged.

“We continue to educate our associates and customers on the safety of the vaccine through resources provided by the CDC and our health care personnel,” Temple said in an emailed statement.

Vaccine conversations are even more complicated for workers in the health care industry who are likely to be more exposed to the virus, and also potentially expose patients.

The Alaskan AIDS Assistance Association decided to make vaccine mandatory for all 20 staffers except those with religious objections, said Shaina Clemens, the nonprofit’s development director. “Because we work with such a vulnerable population. And we are a health social service.”

The organization works with about 250 clients around the state living with HIV, and also offers prevention services like testing and needle exchange.

“Ultimately, we’re here to serve our clients,” Clemens said. “We really feel it’s a big part of our responsibility is to keep everyone safe.”

Advanced Physical Therapy, in Fairbanks, is not requiring vaccinations but everyone in the office has at least their first dose, said office manager Matt Poggemiller.

The vaccine hasn’t changed anything just yet, Poggemiller said.

“We’re just ready to return to normal operations,” he said. “One of the hardest things about masking up — that’s a huge part of how I practice. When you can’t see most of their face, it’s different.”

Business organizations say it seems many companies are encouraging but not requiring employees to get vaccinated.

ConocoPhillips isn’t requiring employees get the vaccines but is trying to make it as accessible as possible for North Slope and Anchorage workers in conjunction with the state and medical providers, according to spokeswoman Rebecca Boys.

The company will offer vaccines at Ted Stevens International Airport for Slope employees and at a clinic at the Anchorage office, Boys said. There are plans for clinics at remote field operations in the near future.

Stacy Yates owns a toy store in Fairbanks with a small staff. She’s not requiring her employees, who include family members, to get vaccinated. But everyone was eager to get the vaccine as soon as they were eligible, Yates said in an email.

“We’ve all been working really hard throughout the past year to maintain a safe, healthy environment in the shop and we are grateful to be able to get the vaccine and do our part to help protect our community, friends, and family, as well as our own health,” she said.

The same situation is at play for the Anchorage Economic Development Corp.: no requirements, but all five employees are vaccinated, said Bill Popp, AEDC president.

Everyone in an office needs to feel like it’s safe to go to work, Popp said. Companies without fully vaccinated employees are deferring to maintaining social distancing and mask wearing.

He suggested business owners get professional help from an attorney or the human resources council before making decisions about vaccine requirements.

“You need good policies, clear guidelines that everybody understands and everybody is briefed on, so everybody knows the rules going forward as we work toward a COVID-free workplace and COVID-free community,” Popp said. “If we ever get all the way there.”

At Bering Straits Native Corp, the board’s decision to mandate vaccines for all 2,100 employees including those at AIH was a matter of cultural values and the scars left by another pandemic, spokeswoman Aarons said.

Headquartered in Nome and serving the majority of Alaska’s Seward Peninsula and the coastal lands of eastern Norton Sound, BNSC operates in numerous sectors ranging from mining to tourism. The corporation acquired AIH in 2015.

The board’s decision has roots in an event a century ago: the 1918 Spanish influenza outbreak, Aarons said. The flu killed 30% to 40% of the adults and elders in the BSNC region.

“Countless young children were left orphaned,” Aarons said. “I’ve heard firsthand stories of people coming into villages after the pandemic had swept through and finding babies nursing from their dead mothers’ breasts.”

Unlike that flu, COVID-19 can be prevented: people who get vaccinated may still contract the disease but it’s highly unlikely they will get sick or die, she said. Data coming out of the region indicates the shareholders who own the corporation value community health.

Some communities, like White Mountain, have achieved herd immunity with a 90% vaccination rate, Aarons said.

“I think that really speaks strongly to the values of our region’s people,” she said. “That’s reflected in our company’s decision to adopt this vaccine requirement.”