Advances in Medical and Surgical Technologies 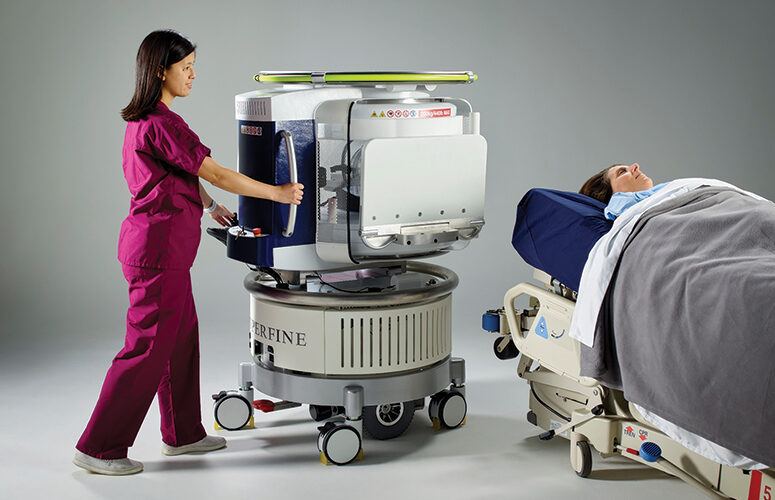 “Swoop,’’ a mobile MRI device that can quickly determine brain bleeding and strokes in critically ill patients without moving them from their beds, was first used in New Jersey earlier this year by medical staff at Hackensack Meridian Health’s JFK University Medical Center in Edison.

Heart disease. Strokes. Cancer. Liver cirrhosis. While COVID-19 has dominated more than a year’s worth of headlines and the public health agenda, these and other illnesses have continued their unfortunate progression as well.

Yet, without much fanfare amid the pandemic, New Jersey’s hospitals and medical technology firms have continued their research, development and testing of cutting-edge technologies to help patients suffering from traditional illnesses and diseases.

The Valley Hospital, for example, is pioneering use of innovative imaging software to pinpoint surgical placement in patients’ hearts with a device known as the Watchman, which reduces stroke risk for those who cannot tolerate blood thinners.

Hackensack Meridian Health, meanwhile, is at the vanguard of testing various diagnostic devices, such as a new medical imaging ultrasound called Elastography that helps Ocean Medical Center radiologists detect liver troubles sooner. At JFK University Medical Center, a mobile MRI is being wheeled to the bedsides of fragile patients in the Intensive Care Unit (ICU) to look for brain bleeding and strokes.

Abbott Point of Care, a Princeton-based unit of Abbott, assists with research, development and manufacturing of the parent medical diagnostic and device company’s i-STAT – a handheld diagnostic system offering real-time results on a wide range of blood tests.

Earlier this year, doctors at Valley Hospital in Ridgewood implanted a Watchman device – essentially a filter – in a patient to prevent a blood clot from escaping and causing a stroke, breaking ground with initial use of TruPlan CT imaging software to better ensure the Watchman’s proper placement in the heart’s left atrial appendage.

“Valley Hospital was the first hospital in the country to get access to this software and show its use in an actual clinical patient,’’ says Dr. Suneet Mittal, a cardiac electrophysiologist who is medical director at Valley’s Snyder Center for Comprehensive Atrial Fibrillation.

“Today in the US, the Watchman device is the only non-pharmacological alternative to a blood thinner to prevent the risk of stroke in a patient with atrial fibrillation who is otherwise at high risk for stroke,’’ Dr. Mittal explains.

Developed by Circle Cardiovascular Imaging, Inc. and marketed by Boston Scientific, maker of the Watchman, the TruPlan software provides doctors high-quality images that enhance pre-procedure planning for the device’s proper sizing, depth and puncture point in the heart membrane for placement.

As doctors watch via ultrasound, the Watchman is unfolded like an umbrella to ensure a complete seal compresses the opening – a process that must be repeated if done incorrectly.

“Every time you fold and unfold the umbrella, you increase the duration of the procedure and you increase the risk of the procedure,’’ Dr. Mittal explains. “The TruPlan software is an attempt to get it perfect the first time. Any time procedures are faster, they generally are safer for patients because there’s less requirement for anesthesia and less chances of experiencing a complication.’’

At Hackensack Meridian’s Ocean Medical Center, radiologists are using a new imaging ultrasound called Elastography to go beyond a conventional ultrasound that typically just tells if a patient’s liver is normal, enlarged, has fatty deposits, or has deteriorated to cirrhosis.

The liver handles the body’s detoxification, and it is vital for physicians to intervene early with patients experiencing issues caused by excessive use of alcohol or hepatitis like fibrosis before the condition advances to cirrhosis.

Dr. Shah explains that fibrosis is a structural change, in which the liver becomes harder and blood flow that should be entering the organ reverses into the rest of the body. This can sometimes cause life-threatening bleeding.

Cirrhosis is an extreme hardening of the liver, which eventually causes it to cease functioning. Cancer of the liver is more common in those suffering cirrhosis.

Elastography “basically gives the doctor at this point an improved tool for risk stratification and lifestyle and behavioral changes,’’ explains Dr. Shah, who is hopeful the technology will be increasingly used by others. “Basically, it’s a non-invasive, safe technology. No radiation is involved.”

In March, JFK University Medical Center in Edison, one of Hackensack Meridian’s three academic facilities, announced it was the first hospital in New Jersey to test a new portable MRI device to quickly determine brain bleeding and strokes.

Known as “Swoop,’’ the portable MR imaging system is made by Hyperfine Research and provides neurological images of critically ill patients, without moving them from ICUs or other bedside locations.

“The patient’s head is inside the actual Hyperfine machine,’’ explains Dr. Siddhart Mehta, a doctor at JFK’s Stroke and Neurovascular Center.

Most MRIs require patients to be transported to the machine because they have huge magnets, often with a size of 1.5 and 3.0 Tesla, a measurement of magnetic field strength. Conversely, the “Swoop” weighs in at just .06 Tesla.

“It’s very portable,’’ Dr. Mehta says. “You will have all the (image) information you need for the big picture.’’

Moving critically ill patients – some hooked to mouth tubes – often is not feasible. Thus, MRIs that may better inform treatments likely will not be done.

“The beauty of this is that we can actually transport this into a room of sick patients,’’ Dr. Mehta says. “In the neuro-critical care, you just want the big picture. The subtle things you don’t need. You just want to see if there is bleeding in the brain. Is there a big stroke that’s happening?”

At Princeton’s Abbott Point of Care, research and manufacturing is done for the i-STAT, a product that streamlines critical blood tests in one handheld device. Abbott says the i-STAT gives quick and reliable results in various clinical settings, physicians’ offices, rural areas, as well as in the field by military personnel or natural disaster relief workers.